Quis Custodiat Custodes? About a Jesuit in Francis’ Inner Circle @AntonioSpadaro and His Special Interest

Spadaro is a highly influential man in the Church as well as being a close adviser of Francis. Interesting bit of news from Fr Zed!


The Roman writer Juvenal penned in his Satires a line which has become an apophthegm about oversight.
Quis custodiet ipsos custodes?   Who is keeping an eye on the guards?
This could be a byword today in The Present Crisis.
Who is overseeing the overseers?
Here is an interesting tweet and retweet.
The tweet in question is from homosexualist James Martin, SJ.  You know all about him. Remember, too, that he was chosen to be a Consultor for the Vatican’s office on social communications. In the tweet, below, Martin is pleased that – as he interprets it – the Pope says that parents should leave their “gay” children “as they are”.  That would, of course, please a Jesuit homosexualist activist.
Martin’s tweet was retweeted – I guess with approval, though sometimes we retweet things we don’t agree with – by a member of Francis’ most intimate circle of advisers and surrogates, Jesuit Antonio Spadaro, editor of La Civiltà Cattolica and co-author therein, with a Protestant, of a disparaging article about Americans.
Here’s the Martin tweet Spadaro retweeted.

I welcome @Pontifex's pastoral words about parents accepting their gay children "as they are." My sense of his comments on psychologists is not "conversion therapy," but that children and young adults often need age-appropriate counseling during that critical time in their lives.

Twitter Ads info and privacy
So, Martin tweets and fellow Jesuit Spadaro retweets.  That’s not so interesting in itself.  You’ve gotta know that birds of a feather… and all that. 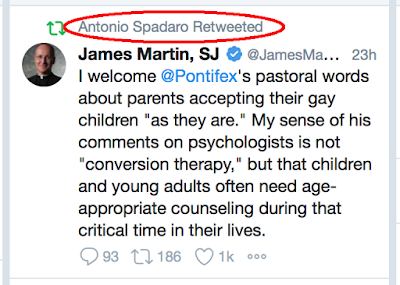 What is also interesting, and what most people don’t know, is that Fr. Spadaro has a special interest.
NB: Spadaro is one of the overseers of the overseers.  Never mind that he isn’t a bishop.  If there is a lofty, papal insider, it is he. He is massively influential.  He doesn’t just report on papal policies and messaging, he  shapes them. Remember that he even traveled to Jesuit-run Boston College to help with the Agitprop Conference that helped to shape what I call the New catholic Red Guards?  HERE
Most people know all that stuff.  Here’s what most people don’t know.
Spadaro created and maintains a site dedicated to the Italian author Pier Antonio Tondelli.  HERE http://www.antoniospadaro.net/tondelli.html 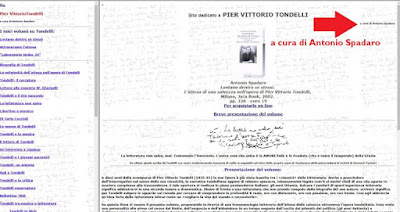 Yes, it is the same Fr. Antonio Spadaro, SJ. If you go to the top index page of the domain, you see him in all his splendor.
So, who was this Tondelli guy who so fascinates Spadaro?
From wiki:

Pier Vittorio Tondelli (September 14, 1955 – December 16, 1991) was an Italian writer who wrote a small but influential body of work. He was born in Correggio, a small town in the Emilia-Romagna region in Italy and died in nearby Reggio Emilia because of AIDS. Tondelli enjoyed modest success as a writer but often encountered trouble with censors for his use of homosexual themes in his works. […] As Tondelli grew older, his reading tastes would develop and in 1974 he began to write his first narratives, saying: “I have always written, starting at 16 years of age with the usual story about adolescent frustrations”. These adolescent frustrations are conflicts between Tondelli’s religiosity, his desire to express his artistry, and his homosexual desires as well as a change in Tondelli’s belief system, in which he writes: “I find it vulgar to pray to God side by side with people for whom God is different from my God.” Tondelli developed a jealousy towards God, who he describes as unique to himself, developing a mysticism all of his own but admitted to losing something as his belief system matured.

It is interesting that Spadaro maintains this personal site about Tondelli and that he has devoted so much energy to this particular Italian writer.
Anyway, I thought it would be helpful to know more about this extremely influential policy-maker – an overseer of overseers – who is constantly at Francis’ side.
And here is a bonus Spadaro tweet.  Translation: “I found such great such great faith in Ireland.  The Irish people has such great faith.  The Irish people know how to distinguish well between the truth and half-truth.”
And, he retweeted himself… which people sometimes do. 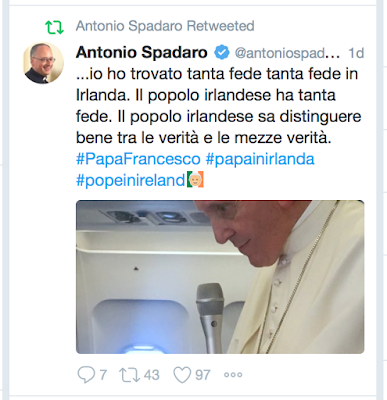 Meanwhile, since the Irish are so perspicacious when it comes to truth and half-truth, check this out.  HERE
BTW… I am blocked by Spadaro on Twitter. 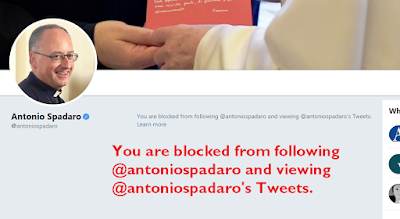