Who Was Uncle Teddy McCarrick's Friend and What Was the Role of Freemasonry in the Election of Jorge Bergoglio?

Could it be....Gustavo Raffi, Grand Master of the atheistic, anti-Catholic, revolutionary Grand Orient of Italy and Servant of Satan? I'm sure he is 'a very interesting and influential Italian gentleman' and 'a very influential man in Rome'.

Originally published on April 28, 2016, it is good to see that this information has finally come to light by more prominent writers.

Given the explosive Testimony of Archbishop Carlo Maria Viganò, this self-incrimination by McCarrick reveals as much about Pope Francis and what was owed to McCarrick for "talking him up."

According to Viganò, without McCarrick, there would be no Bishop McElroy, or no Cardinals Tobin, Farrell or Cupich. 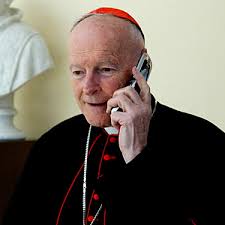 Theodore Cardinal McCarrick, former Archbishop of Washington during a talk at Villanova University gave the following recollection of a conversation with an "influential" Roman during the period before the Conclave which elected Jorge Bergoglio as Bishop of Rome.

18:20 Just before we went into the general conversations when everybody can talk, a very interesting and influential Italian gentleman came to ask if he could come and see me, so I said “sure.”
He came to see me at the Seminary, at the American College where I was staying; and we sat down. He is a very brilliant man, a very influential man in Rome and we talked about a number of things. He had a favour to ask me when I get back to the United States, but then he asked,
“What about Bergoglio?”
I was surprised at the question, I said, “what about him.”
He said, “Does he have a chance?”
I said, “I don’t think so, because no one has mentioned his name, he hasn’t been in anybody’s mind, I don’t think it’s on anybody’s mind to vote for him.”
He said, “He could do it you know.”
I said, “What could he do?”
He said, “He could reform the Church, if we gave him five years, he could put us back on target. “
“Well, he’s 76.”
“Yeah, in five years, if he had five years. The Lord working through Bergoglio in five years could make the Church over again.”
I said, “That’s an interesting thing.”
“I know you’re his friend.”
“Well, I hope I’m his friend.”
He said, “Talk him up.”
That was the first that I heard from people that Bergoglio would be a possibility in this election.

I hope that the new, that the one who is elected Pope, will be someone who, if he is not himself a Latin American, would at least have a very strong interest in Latin America”. “Was that part of it? Who knows?  What is it my friend said? “Push Bergoglio”?  Did he say it to a lot of people? I don’t know.”


Gustavo Raffi, Grand Master of the Grand Orient of Italy

"With the election of Pope Francis nothing will ever be the same again. With Pope Francis, nothing will be more as it was before. It is a clear choice of fraternity for a Church of dialogue, which is not contaminated by the logic and temptations of temporal power"
“A man of the poor far away from the Curia. Fraternity and the desire to dialogue were his first concrete words. Perhaps nothing in the Church will be as it was before. Our hope is that the pontificate of Francis, the Pope who 'comes from the end of the world' can mark the return to the Church-Word instead of the Church-Institution, promoting an open dialogue with the contemporary world, with believers and non-believers, following the springtime of Vatican II."
"The Jesuit who is close to the least ones of history," Raffi continues, "has the great opportunity to show the world the face of a Church that must recover the announcement of a new humanity, not the weight of an institution that closes itself off in defense of its own privileges. Bergoglio knows real life and will remember the lesson of one of his favorite theologians, Romano Guardini, for whom the truth of love cannot be stopped.
"The simple cross he wore on his white cassock," concludes the Grand Master of Palazzo Giustiniani, "lets us hope that a Church of the people will re-discover its capacity to dialogue with all men of good will and with Freemasonry, which, as the experience of Latin America teaches us, works for the good and progress of humanity, as shown by Bolivar, Allende and José Martí, to name only a few. This is the 'white smoke' that we expect from the Church of our times."

"Dialogue, dialogue, dialogue!" This, he said, is the only way for individuals, families and societies to grow. He said fraternal relations between people and cooperation in building a more just society are not some vague utopia but the fruit of a concerted effort on the part of all, in service of the common good.
http://www.news.va/en/news/pope-francis-my-advice-is-always-dialogue-dialogue

Pope to U.S. bishops: be shepherds in unity and dialogue
http://en.radiovaticana.va/news/2015/09/23/pope_to_us_bishops_be_shepherds_in_unity_and_dialogue/1174163

Pope's general prayer intention for November is for dialogue
http://en.radiovaticana.va/news/2015/10/31/popes_general_prayer_intention_for_november_is_for_dialogue/1183565

The whole video can be seen here.