An absolutely wonderful article from Father Athanasius McVay, Priest and Church historian specialising in the history of the Holy See's diplomacy and of the Ukrainian Greek-Catholic Church in the XIX and XX centuries. Fellow of the Chair of Ukrainian Studies, University of Toronto. His blog 'Annales Ecclesiae Ucrainae' is linked in the side bar, and I highly recommend it. 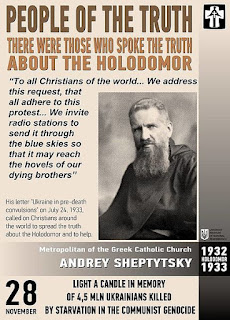 Kyr Andrey's appeal to the Christians
of the world to protest the Ukrainian
Genocide or the Holodomor.

Link to the article.
Posted by Jovan-Marya Weismiller, T.O.Carm. at 00:29