More Adventures of the Bread Machine

This post is an update to The Adventure of the Bread Machine. After that, edible, disaster, I ended up with one that was even worse. It was the same recipe, which I read very carefully. It was still technically edible, but it ended up in stuffing. I couldn't figure out the problem!

We thought perhaps we had messed up the programmable controls without realising it, and that that was the problem. No, as it turned out. After my second disaster, my Other Half turned out yet another beautiful, delicious loaf.

However, she pointed out that the rye flour I was using was quite old and that might be the problem. I'm not sure I understand how old flour would ruin a recipe, but to be sure she made biscuits for the Household Canine with the remainder. He likes them!

So, today, I tried for the third time. I decided to use the recipe for wholemeal wheat bread that she had been using. I read the recipe carefully, measured the ingredients equally carefully, and put them in the bread machine,

The verdict is in! The bread machine does not hate me! 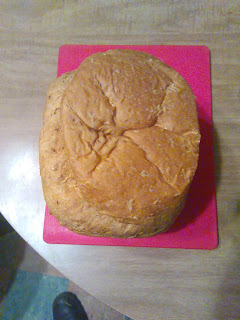 It turned out to be a beautiful loaf, and my Other Half pronounced it delicious! Now, my next adventure, when this loaf is eaten, will be a third attempt at the Swedish rye bread with caraway seed. This time, I will not only read the recipe carefully, but I will be using fresh flour!
Posted by Jovan-Marya Weismiller, T.O.Carm. at 18:23