It was on this date in 1871, that Monsignor Robert Hugh Benson was born. He was an English Roman Catholic priest and writer. He was formerly a priest from the Church of England and converted to Catholicism in 1903. He died on October 19,1914. 146 years ago today since his birth.

He was not just 'any' CofE priest either. He was ordained in the Anglican Church by his father, who just happened to be the Archbishop of Canterbury. His father was dead, however, by the time he converted. 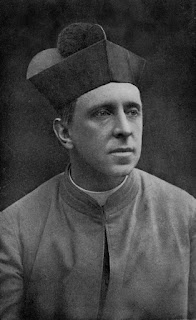 Here's an excellent blog dealing with some of his novels.