A few weeks ago, I was visiting my Sister. She passed on to me two pins that my Mum had when she passed. The top one is a 'Sweetheart Pin' which my Father, Perry Weismiller, PFC, Hq&Hq Sqdn 8th Army Air Force, gave her. It is pin backed, and is the badge of the 8th Army Air Force hanging from a blue ribbon. 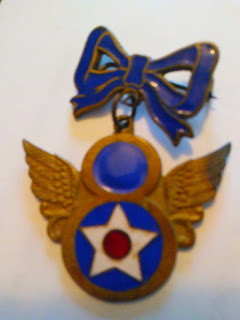 This one was my Grandmother's British Legion, Women's Section pin. It would be different today. Since the Legion is no longer limited to only those who served in the military, but is open to family members, it would no longer carry the differentiation at the top, and since Her Majesty the Queen granted us the privilege of  her Patronage in 1971, it would now read 'Royal British Legion'. Another minor change, invisible from the front, is that this pin is 'pin backed', whilst my current membership pin has a 'pillar and clip' back. 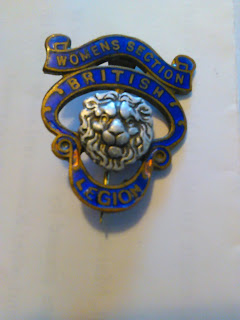 I cherish them both, and when I pass, they are going to my two daughters, one to each of them.
Posted by Jovan-Marya Weismiller, T.O.Carm. at 04:18