Tonight when I arrived at Church for Mass, I stood outside for a few minutes, just enjoying the relatively 'warm' evening. When I started to go into the Church, I noticed, for the first time, that the stained-glass windows in the double doors had figures on them. I had noticed that the windows in the main Church, whilst stained-glass, had a simple, geometric diamond pattern, but I'd never noticed the doors. I've attended St Wenceslaus very occasionally for 35 years and for the last four and a half months every week, plus making visits during the week on a regular basis.

Here are the windows- First is our Patron Saint Wenceslaus, also the Patron of Bohemia, the Czech Republic and of Prague, the capital of Czechia. It is on the right door as you enter. 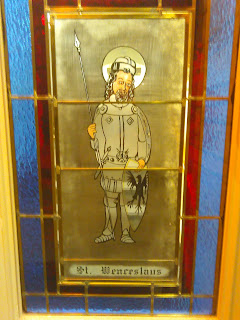 On the left door is the image of his grandmother, Saint Ludmilla, wife of Bořivoj I, Duke of Bohemia, who taught him the Faith. She is Co-Patron with her grandson of  Bohemia and the Czech Republic, and Patron of converts, which I am, problems with in-laws (her daughter-in-law, Drahomíra, had her murdered, so I can see why!), duchesses, and widows. She is the Patron of our Church hall. 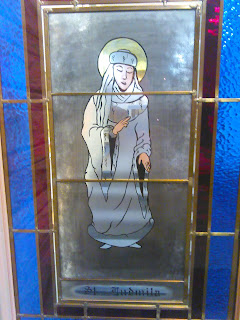 Anyway, I'm going to try to be more observant. God only knows what I'm missing!😄
Posted by Jovan-Marya Weismiller, T.O.Carm. at 23:34