Eternal Memory to a Brave Warrior!

It was on this date in 1907, that Claus Philipp Maria Justinian, Schenk Graf von Stauffenberg was born. He was an Oberst (Colonel) in the Wehrmacht and an Uradel who was one of the leading officers of the failed July 20,1944 plot to assassinate Nazi leader Adolf Hitler and remove the Nazi Party from power. He was a devout Catholic and a German nationalist, his reasons to kill Hitler were because of the ongoing conflict and the persecution of the Jews. After the plot failed, Stauffenberg and his fellow conspirators were executed by a firing squad in the Bendlerblock courtyard on July 21,1944. His last words were "Es lebe das heilige Deutschland!" ("Long live our sacred Germany!"). 110 years ago today since his birth.


Memory Eternal! We will remember them! Lest we forget! 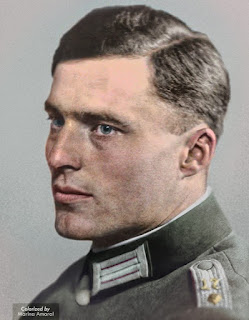