Should Christians Apologize for the Crusades?

Just my two cents worth, 'HELL NO!' See my post, Bill Warner, PhD: Jihad vs Crusades 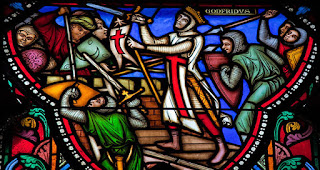 
Our schools and our Catholic schools in particular should be proud to associate with those who fought and died to ensure that pilgrims might have access to the holy sites of their faith, that Christian nations might survive in the face of a powerful invader, and that they might serve their Church and their God. We can build on this pride an understanding of other peoples’ actions, even when they are extreme, only if and to the extent that we retain our moral compass, which means respecting the dictates of our own civilization and refusing to cede the moral high ground to those who reject it for us all.
Editor’s note: This column first appeared February 19, 2016 in Imaginative Conservative and is reprinted with permission. (Photo courtesy of Shutterstock.)