A guest post by my friend Laramie Hirsch, author of The Hirsch Files blog. 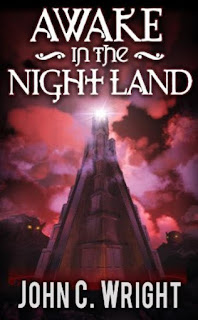 I really like the writing of Catholic fiction writer, John C. Wright.  His book, Awake In The Night Land, was second-to-none, absolutely incredible, and I recommend anyone with an imagination to read it this winter.  It is the "Dante's Inferno" of the 21st Century.

That being said, Wright hates monarchy.

Back in July, I came across one of his articles, in which he vehemently attacks fellow Catholics who give an ear to the idea of monarchy.  This attack is manifested in his long article, Unanswered Equality Challenge.

I immediately wanted to participate in the public discussion against his ideas, but I was unable to get anywhere, really, as it seemed an emotionally-charged topic that month, he was responding to many people, and I didn't want to overwhelm him.  His tone with me in the comment box was also a bit sharp, but he later apologized, stating:

Please accept my apology where I have surrendered to the temptation to be gruff or snide. It is an ongoing battle.

And, of course, I do accept the apology.  We've gotten along before in the past, he's a fellow Catholic, and he was taking some heat from not a few people who disagreed with him.  Plus, I respect the man.  I respect his talent, his creativity, his imagination, and his ability to presciently delineate many of the ills of our society.  I look up to Wright, and I would like to afford him as much dignity as I can.

Yet, I'm not going to disagree with him or any man on everything.  And his hatred of monarchy has me shocked, as I've stated earlier this year.

It has taken me up until now--four months later--to return to his arguments.  In the interest of dialectic and the exploration of ideas, I had to return to this article he wrote.

I have done my best to organize the major points that Wright brings up in his blog post.  And now, for starters, I intend to discuss each of those points in full essays in the weeks and months to come.

I must admit, I had some difficulty following his blog post.  But I do believe I have pinpointed the kernels of argument, and I am now ready to begin.

I hope that by the end of this episode, I will have been helpful and explained the Social Kingship of Christ.  But also, I intend to tackle the following points:

- Wright's claim about Thomas Jefferson
- Free Speech
- The Magna Carta
- The Jews as a form of typological "monarch collective" for the rest of mankind
- Privilege vs duties vs rights, and natural rights
- By-products of political systems
- Wealthy oligarchs

By approaching these topics one-by-one, I hope to approach Wright's arguments in an organized fashion that is easy for everyone to follow.

I hope to be respectful.  Wright really is on the right track most of the time, and when I read his essays, I find myself agreeing with him and cheering him on more often than not.

Here's to hoping the next few months will be constructive.
Posted by Jovan-Marya Weismiller, T.O.Carm. at 23:21