A Dark Day in History

Today, for traditional conservatives and monarchists ranks with the execution of HM Charles I, and 14 July 1789 and the subsequent execution of HMCM Louis XVI. It is the anniversary of the Russian Revolution. I wish I could border this post in black as a sign of mourning.

Communism has slaughtered in the vicinity of 100,000,000 people since its achieving State Power in Russia.

From The Black Book of Communism, quoted in The Commentator:

And here is a link to the Wikipedia article, List of Holodomor Memorials and Monuments.

Below is an article from the Wall Street Journal, Communism's Bloody Century.

By
Stephen Kotkin
A century ago this week, communism took over the Russian empire, the world’s largest state at the time. Leftist movements of various sorts had been common in European politics long before the revolution of Oct. 25, 1917 (which became Nov. 7 in the reformed Russian calendar), but Vladimir Lenin and his Bolsheviks were different. They were not merely fanatical in their convictions but flexible in their tactics—and fortunate in their opponents.

His Great Leap Forward, a violent campaign from 1958 to 1962, was an attempt to collectivize some 700 million Chinese peasants and to spread industry throughout the countryside. “Three years of hard work and suffering, and a thousand years of prosperity,” went one prominent slogan of the time.
Falsified reports of triumphal harvests and joyful peasants inundated the communist ruling elite’s well-provisioned compound in Beijing. In reality, Mao’s program resulted in one of history’s deadliest famines, claiming between 16 and 32 million victims. After the catastrophe, referred to by survivors as the “communist wind,” Mao blocked calls for a retreat from collectivization. As he declared, “the peasants want ‘freedom,’ but we want socialism.”
Nor did this exhaust the repertoire of communist brutality in the name of overthrowing capitalism. With their conquest of Cambodia in 1975, Pol Pot and his Khmer Rouge drove millions from the country’s cities into the countryside to work on collectives and forced-labor projects. They sought to remake Cambodia as a classless, solely agrarian society.
The Khmer Rouge abolished money, banned commercial fishing and persecuted Buddhists, Muslims and the country’s ethnic Vietnamese and Chinese minorities as “infiltrators.” Pol Pot’s regime also seized children to pre-empt ideological infection from “capitalist” parents.
All told, perhaps as many as 2 million Cambodians, a quarter of the population, perished as a result of starvation, disease and mass executions during the four nightmarish years of Pol Pot’s rule. In some regions, skulls could be found in every pond.
Marx’s class analysis denied legitimacy to any political opposition, not just from “bourgeois” elements but from within communist movements themselves—because dissenters “objectively” served the interests of the international capitalist order. The relentless logic of anticapitalist revolution pointed to a single leader atop a single-party system.
From Russia and China to Cambodia, North Korea and Cuba, communist dictators have shared key traits. All have conformed, more or less, to the Leninist type: a fusion of militant ideologue and unprincipled intriguer. And all have possessed an extreme willpower—the prerequisite for attaining what only unspeakable bloodshed could bring.
Communism was hardly alone over the past century in committing grand carnage. Nazism’s repression and wars of racial extermination killed at least 40 million people, and during the Cold War, anticommunism spurred paroxysms of grotesque violence in Indonesia, Latin America and elsewhere.
But as evidence of communism’s horrors emerged over the decades, it rightly shocked liberals and leftists in the West, who shared many of the egalitarian aims of the revolutionaries. Some repudiated the Soviet Union as a deformation of socialism, attributing the regime’s crimes to the backwardness of Russia or the peculiarities of Lenin and Stalin. After all, Marx had never advocated mass murder or Gulag labor camps. Nowhere did he argue that the secret police, deportation by cattle car and mass death from starvation should be used to establish collective farms.
But if we’ve learned one lesson from the communist century, it is this: That to implement Marxist ideals is to betray them. Marx’s demand to “abolish private property” was a clarion call to action—and an inexorable path to the creation of an oppressive, unchecked state.
A few socialists began to recognize that there could be no freedom without markets and private property. When they made their peace with the existence of capitalism, hoping to regulate rather than to abolish it, they initially elicited denunciations as apostates. Over time, more socialists embraced the welfare state, or the market economy with redistribution. But the siren call to transcend capitalism persists among some on the left.
It also remains alive, though hardly in orthodox Marxist fashion, in Russia and China, the great redoubts of the communist century. Both countries continue to distrust what is perhaps most important about free markets and private property: Their capacity to give independence of action and thought to ordinary people, pursuing their own interests as they see fit, in private life, civil society and the political sphere.

To Keep Up With AI, We’ll Need High-Tech Brains October 27, 2017
The World’s Next Environmental Disaster October 20, 2017
China Takes On Its New TycoonsOctober 13, 2017
How Smartphones Hijack Our MindsOctober 6, 2017
The Lessons of Leonardo: How to Be a Creative Genius September 29, 2017


But anticapitalism also served as a program for an alternative world order, one in which long-suppressed nationalist aims might be realized. For Stalin and Mao, heirs to proud ancient civilizations, Europe and the U.S. represented the allure and threat of a superior West. The communists set themselves the task of matching and overtaking their capitalist rivals and winning a central place for their own countries on the international stage. This revolutionary struggle allowed Russia to satisfy its centuries-old sense of a special mission in the world, while it gave China a claim to be, once again, the Middle Kingdom.
Vladimir Putin’s resistance to the West, with his peculiar mix of Soviet nostalgia and Russian Orthodox revival, builds on Stalin’s precedent. For its part, of course, China remains the last communist giant, even as Beijing promotes and tries to control a mostly market economy. Under Xi Jinping, the country now embraces both communist ideology and traditional Chinese culture in a drive to raise its standing as an alternative to the West.
Communism’s bloody century has come to an end, and we can only celebrate its passing. But troubling aspects of its legacy endure.

And here is the problem! 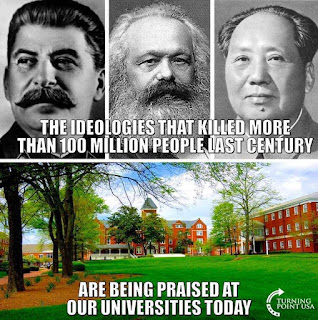 And this is the result!

REVEALED: Nearly half of millennials in America would prefer to live in a socialist rather than capitalist society, according to new survey