The World Turned Upside Down


Take a second to consider the bizarre, insane, and evil inversions going on.

Innocent college boys are accused of rape, but the real rape culture that goes with Islam is perfectly kosher, and we need more of it.

Little girls wearing make-up in beauty contests is evil, but little boys dressing up like drag queens is awesome.

Black on white crime is, and has been for years, through the roof and no one says anything about it, but NYT op eds are written about how it's wise for black parents to teach their kids to be afraid of white people.

The Turtle Rescue League (which I imagine to be a fine organization with fine goals) has this on their website "Helping starts early with our incubating and hatching programs. Turtle eggs in danger of being destroyed or in dangerous areas (construction areas) can still be viable turtles of tomorrow. Helping the very delicate, unborn turtle, is a task taken very seriously. The death of a mother turtle on the road does not have to end her story. With care, love, and hope we usher forth the next generation of our wonderful turtles." But I betcha $20 that the people involved are pro-abortion.

College campuses, places that should be bastions of free speech, are filled with academics and students who believe this way: 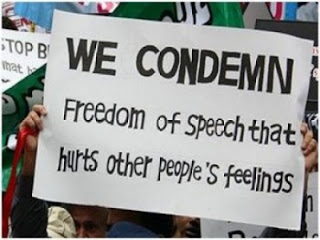 Islam, Judaism, Buddhism, shamanism, Native American religion, Wicca, Satanism, etc. are good, but Christianity is bad --  in spite of the fact that it is objectively true and the only religion with the Person of Christ, the Master of Love, at its center.
The races don't exist, but white people are bad, and BLM is good.

The sexes don't exist, but men can become women.

The sexes don't exist, but men are bad, and women are good.


Masculinity is toxic, but we should rejoice when a woman "becomes a man."

Objective Truth doesn't exist, but everything the Left posits is true. And you'd better believe it or else.

Guns are bad, but Hollywood violence is good.

The statues of Founding Fathers should come down, but statues of Lenin and the adulterous, plagiarizing Marxist Martin Luther King, Jr. should stay.

As a group, women don't want to be software engineers, but they won't shut up until there are equal numbers of men and women in the field (thy don't care, though, that there aren't equal numbers of male and female trash collectors, nurses, construction workers, or beauticians).

Marriage is outre ("what's a piece of paper anyway?"), but gays must be able to "marry" or the world will come to an end from all the "injustice."

Unborn babies are "clumps of cells" -- until a pro-abort woman is pregnant and wants to keep it. Then it's magically a baby.

Diversity is the strength of the West, but Israel needs to be Jewish. And, oh, poor Tibet!

Catholics are homophobes, but the Dalai Lama, who also thinks gay sex is wrong, is kewl.

Smokers are awful, but talking about obesity is "fat-shaming"* and being real about homosexual sex is totally verboten.

* To be clear, I don't like "fat-shaming" either. And I note that it's usually done to women. I hate seeing heavy people being made fun of, getting called names ("land whale"), or having unwarranted assumptions made about them (e.g., the assumption that fat people are lazy, that they all eat any more than anyone else, they they don't exercise, etc.). I also think the standards for what's now considered "fat" are ridiculous. At the same time, true obesity is a medical problem, and people should be encouraged, prudently and lovingly, to be healthy.