Why Was Pope Francis Silent on Ireland Voting for Abortion?

Because to speak out might have caused him to be perceived as one of those 'rigid, fundamentalist' Catholics who actually believe and practice the Catholic Faith? You know, one of those people he loves to insult and denigrate.

However, an Anglican friend of mine, Mr Theodore Harvey of  the Royal World blog, had an interesting take, with which I agree (emphasis added),


My interpretation of Francis's apparent inconsistency (speaking up on Alfie but silent on the abortion referendum)--well, besides the fact that he's evil or deranged or whatever--is that "Catholic" liberals can criticize anti-Catholic actions of the State when they are "undemocratic" in character, as the treatment of Alfie and his parents was, but cannot criticize Democracy (their real religion), because that would open the way to questioning liberalism itself, and we can't have that! 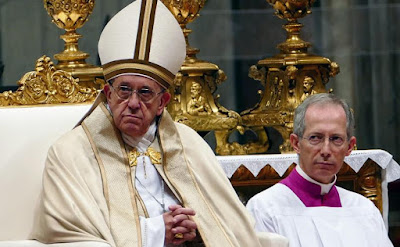 Pope Francis at 2016 Rome consistory when "progressive" archbishops
Cupich, Joseph Tobin and Farrell were made cardinals

May 30, 2018 (LifeSiteNews) – While the world reeled at the alleged comments Pope Francis recently made on homosexuality, it also noticed the pontiff’s deafening silence on Ireland’s now-lost abortion referendum.
Pope Francis allegedly told a male victim of priestly sex abuse that God “made” him gay and that’s “okay,” which made headlines around the world. The Vatican press office wouldn’t confirm or deny the comment.
Many have noted the Catholic Church’s minimal role in the campaign to save the pro-life Eighth Amendment, partly because the homosexual sex abuse crisis was so bad in Ireland that it shattered the Church’s credibility. However, despite the pontiff’s “progressive” reputation, his opinion nevertheless may have been of some help to the pro-life side as it tried to win over voters.
“In 1983, the Catholic hierarchy played no little role in the passing of the Eighth Amendment,” the BBC reports. “However, in the intervening years, it has seen its standing greatly diminished with revelations about bishops not reporting paedophile priests to the civil authorities.”
The BBC contrasted Pope St. John Paul II’s “triumphal” visit to Ireland, which preceded the adoption of the Eighth Amendment, with Pope Francis’ upcoming visit, during which he will “find a country undoing part of the legacy of a previous papal visit.”
Ireland is “clearly part of Europe’s secular sprint out of the Roman Catholic fold,” the New York Times observed.
“Across Western Europe, the church’s once mighty footprint has faded, in no small measure because of self-inflicted clerical sex abuse scandals and an inability to keep up with and reach contemporary Catholics,” it continued. “Church attendance has plummeted, parishes are merging, and new priests and nuns are in short supply. Gay marriage is on the rise, and abortion is widely legal.”
“And yet, Francis is not sounding the alarm or calling the faithful to the ramparts,” the Times went on. “He seems resigned to accept that a devout and Catholic Europe has largely slipped into the church’s past...If the landslide vote in Ireland bothered Francis, he didn’t show it on Sunday afternoon.”
The pope’s silence as a formerly Catholic country voted on an intrinsic evil is reminiscent of his treatment of Italy’s same-sex unions debate.
Two situations of bio-ethical and moral importance in which Pope Francis has taken interest were the cases of Alfie Evans and Charlie Gard, a toddler and an infant whose respective parents fought English hospitals to be able to continue their sons’ care elsewhere. The pope’s support of the little boys included offering them spots at Rome’s Bambino Gesu hospital, and in the case of Alfie, readying a military helicopter to fly him there.
Pope Francis is scheduled to visit Ireland in August for the World Meeting of Families, an event which the bishops of Ireland have already used to push the LGBT cause.
Posted by Jovan-Marya Weismiller, T.O.Carm. at 16:19