BREAKING - Scandal: A Bishop "Married" with Children Will Be Created Cardinal by Francis (Exclusive in English)

How long, O Lord, how long! Is there nothing Francis will not do to undermine the Church and Faith of Christ!?


Scandalous news first broken by our Spanish-language partners at 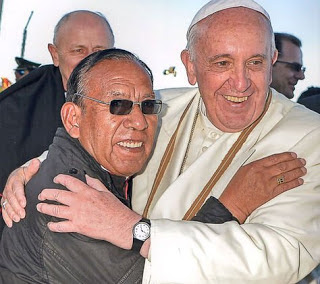 Adelante la Fe. The information has been appropriately and thoroughly checked from multiple sources on the ground.

On May 2th, 2018, Pope Francis announced that in the consistory to be celebrated on June 29 this year, Feast of the Holy Apostles Peter and Paul, he will raise to the cardinalship Bp. Toribio Ticona, titular bishop of Timici and prelate emeritus of Corocoro, Bolivia. The 81-year-old bishop was born on April 25, 1937. He was ordered priest in 1967 and consecrated as Timici's bishop and axiliary bishop of Potosí, Bolivia, on May 31st, 1986. In 1992 he was appointed prelate of Corocoro, retiring in 2012.

During his frequent visits to Oruro at the beginning of his office, the then bishop of Oruro and future Third World ideologist cardinal, Julio Terrazas Sandoval, CSsR, boasted visiting Oruro's bishop and called him his "padrino" or sponsor, since he said he had been promoted to the bishopric thanks to Terrazas,who on several occasions as president of the Bolivian Conference of Bishops, and obviously was very influential on the other bishops and the apostoloic Nunciature.

Ticona participated in two Ad Limina visits, in 2008 and 2017. He served as alcalde, according to the local traditional customs of a 12-person community in Bolivia. During his 10-year tenure in the Corocoro prelaturre, the Catholic flock went down from 94.6% to 87.6%, while the Protestant sects's following grew. It is a well-known fact that while he was servirng his office in Corocoro, he was living more uxorio with a lady in Oruro's chancery. She and her children are proud to be called wife and children of the Patacamaya bishop, as Bishop Toribio Ticona is also known.

The family of Bp. Toribio Ticona, Patacamaya bishop, lived in up to three different places of residence in Oruro.

Since the 9th and 10th centuries, known as the Iron Century of Papacy, there has been no sure, reliable news of a concubinarian bishop being rewarded with the title of cardinal. Being a Prince of the Church entails an important responsibility for the office holder, since he serves directly the petrine ministry. Therefore, a concubinarian cardinal's promotion sends two messages: 1, the Pope's wish to eliminate priestly celibacy, and 2, that he has a scapegoat foro working against Bolivia's bishops hierarchy. 2 bishoprics and 3 other church circumscriptions are to be renewed this year. We can be sure that Bishop Barros' case will be repeated in Bolivia, thanks to which Pope Francis would have, with Evo Morales' backing, control over Bolivia's Church, which would then have a marked leftist tone.

P.S. We have used the term, married, because his co-cohabitant partner properly speaks of "her husband".