The Feast of Corpus Christi

Despite what your Church bulletin might have told you, today is the Feast of Corpus Christi! It was instituted in the 13th century, with the Mass and Office composed by the Angelic Doctor, St Thomas Aquinas.

It was set on the Thursday after Trinity for a very good reason. The Holy Eucharist was instituted on Maundy Thursday, but because of the penitential character of the Sacred Triduum there can be no joyful celebrations of this saving Sacrament on the day of its institution. However, in these lax, modern times, Bishops in many countries have moved the Feast to an External Solemnity kept on the Sunday following. 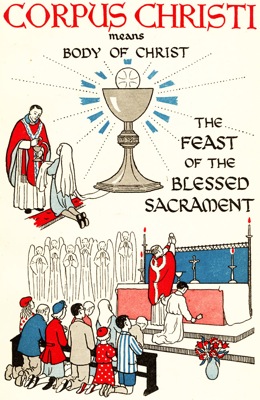 Here is the text of the Bull, Transiturus de Hoc Mundo, issued by His Holiness Pope Urban IV on 11 August 1264.

Urban Bishop,
servant of the servants of God, to the venerable brothers, Patriarchs, Archbishops, Bishops, and other prelates of the Church, health and the apostolic blessing.

About to pass from this world to the Father, our Saviour the Lord Jesus Christ, since the time of his Passion was at hand, instituted the great and wonderful Sacrament of his Body and Blood, bestowing his Body as food and his Blood as drink. For, as often as we eat this bread and drink this cup, we announce the death of the Lord. Indeed, at the institution of this Sacrament, he himself said to the Apostles: Do this in memory of me: so that for us the special and outstanding memorial of his love would be this venerable Sacrament; a memorial in which we attain the corporeal Presence of the Saviour himself.

Other things which we remember we embrace spiritually and mentally: we do not thereby obtain their real presence. However, in this sacramental commemoration, Jesus Christ is present with us in his proper substance, although under another form. As he was about to ascend into heaven, he said to the Apostles and their helpers, I will be with you all days even unto the consummation of the world. He comforted them with a gracious promise that he would remain and would be with them even by his corporeal presence. Therefore he gave himself as nourishment, so that, since man fell by means of the food of the death-giving tree; man is raised up by means of the food of the life-giving tree. Eating wounded us, and eating healed us. Thus the Saviour says, My Flesh is real food. This bread is taken but truly not consumed, because it is not transformed into the eater. Rather, if it is worthily received, the recipient is conformed to it.

We should celebrate continuously the memory of this memorial, because the more frequently his gift and favour are looked upon, so much the more firmly are they kept in memory. Therefore, although this memorial Sacrament is frequented in the daily solemnities of the Mass, we nevertheless think suitable and worthy that, at least once a year – especially to confound the lack of faith and the infamy of heretics – a more solemn and honourable memory of this Sacrament be held. This is so because on Holy Thursday, the day on which the Lord himself instituted this Sacrament, the universal Church, occupied with the reconciliation of penitents, blessing the chrism, fulfilling the Commandments about the washing of the feet and many other such things, is not sufficiently free to celebrate so great a Sacrament.

Moreover we know that, while we were constituted in a lesser office, it was divinely revealed to certain Catholics that a feast of this kind should be celebrated generally throughout the Church. Therefore, to strengthen and exalt the Catholic Faith, we decree that, besides the daily memory that the Church makes of this Sacrament, there be celebrated a more solemn and special annual memorial. Then let the hearts and mouths of all break forth in hymns of saving joy; then let faith sing, hope dance, charity exult, devotion applaud, the choir be jubilant, and purity delight. Then let each one with willing spirit and prompt will come together, laudably fulfilling his duties, celebrating the Solemnity of so great a Feast.