I receive Holy Communion only kneeling and on the tongue. Recently, I mentioned this on Facebook, and a friend said 'Just wait 20 or 30 years until you have bad knees or arthritis!' I had to laugh! I'm 70, I've had arthritis since I was a boy, and a bad knee ever since I took a dashboard out with it in an auto accident over 20 years ago.

But as long as I can kneel to receive my Lord and King and still get back up, I will do so! 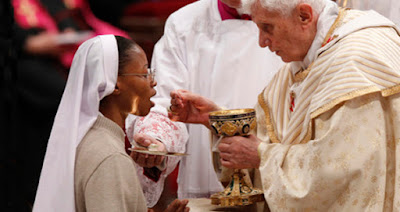 Ten years ago Pope Benedict XVI gave the world a teaching moment in Eucharistic reverence. On the Solemnity of Corpus Christi, 2008, the Holy Father restored the traditional practice of distributing Holy Communion on the tongue (while kneeling) at all papal masses. The below explanation, provided at the time by the Office of Liturgical Celebrations of the Supreme Pontiff, is still available at the Vatican’s website. What is so unfortunate to see, ten years later, is how Benedict’s brother bishops have completely ignored his beautiful example.
The most ancient practice of distributing Holy Communion was, with all probability, to give Communion to the faithful in the palm of the hand. The history of the liturgy, however, makes clear that rather early on a process took place to change this practice.
From the time of the Fathers of the Church, a tendency was born and consolidated whereby distribution of Holy Communion in the hand became more and more restricted in favor of distributing Holy Communion on the tongue. The motivation for this practice is two-fold: a) first, to avoid, as much as possible, the dropping of Eucharistic particles; b) second, to increase among the faithful devotion to the Real Presence of Christ in the Sacrament of the Eucharist.
Saint Thomas Aquinas also refers to the practice of receiving Holy Communion only on the tongue. He affirms that touching the Body of the Lord is proper only to the ordained priest.
Therefore, for various reasons, among which the Angelic Doctor cites respect for the Sacrament, he writes: “. . . out of reverence towards this Sacrament, nothing touches it, but what is consecrated; hence the corporal and the chalice are consecrated, and likewise the priest’s hands, for touching this Sacrament. Hence, it is not lawful for anyone else to touch it except from necessity, for instance, if it were to fall upon the ground, or else in some other case of urgency” (Summa Theologiae, III, 82, 3).
Over the centuries the Church has always characterized the moment of Holy Communion with sacredness and the greatest respect, forcing herself constantly to develop to the best of her ability external signs that would promote understanding of this great sacramental mystery. In her loving and pastoral solicitude the Church has made sure that the faithful receive Holy Communion having the right interior dispositions, among which dispositions stands out the need for the Faithful to comprehend and consider interiorly the Real Presence of Him Whom they are to receive. (See The Catechism of Pope Pius X, nn. 628 & 636). The Western Church has established kneeling as one of the signs of devotion appropriate to communicants. A celebrated saying of Saint Augustine, cited by Pope Benedict XVI in n. 66 of his Encyclical Sacramentum Caritatis, (“Sacrament of Love”), teaches: “No one eats that flesh without first adoring it; we should sin were we not to adore it” (Enarrationes in Psalmos 98, 9). Kneeling indicates and promotes the adoration necessary before receiving the Eucharistic Christ.
From this perspective, the then-Cardinal Ratzinger assured that: “Communion only reaches its true depth when it is supported and surrounded by adoration” [The Spirit of the Liturgy (Ignatius Press, 2000), p. 90]. For this reason, Cardinal Ratzinger maintained that “the practice of kneeling for Holy Communion has in its favor a centuries-old tradition, and it is a particularly expressive sign of adoration, completely appropriate in light of the true, real and substantial presence of Our Lord Jesus Christ under the consecrated species” [cited in the Letter “This Congregation” of the Congregation for Divine Worship and the Discipline of the Sacraments, 1 July 1, 2002].
John Paul II, in his last Encyclical, Ecclesia de Eucharistia (“The Church comes from the Eucharist”), wrote in n. 61: “By giving the Eucharist the prominence it deserves, and by being careful not to diminish any of its dimensions or demands, we show that we are truly conscious of the greatness of this gift. We are urged to do so by an uninterrupted tradition, which from the first centuries on has found the Christian community ever vigilant in guarding this ‘treasure.’ Inspired by love, the Church is anxious to hand on to future generations of Christians, without loss, her faith and teaching with regard to the mystery of the Eucharist. There can be no danger of excess in our care for this mystery, for ‘in this sacrament is recapitulated the whole mystery of our salvation.’”
In continuity with the teaching of his Predecessor, starting with the Solemnity of Corpus Christi in the year 2008, the Holy Father, Benedict XVI, began to distribute to the faithful the Body of the Lord, by placing it directly on the tongue of the faithful as they remain kneeling.
(Photo credit: CNS photo/Paul Haring)
Posted by Jovan-Marya Weismiller, T.O.Carm. at 12:28