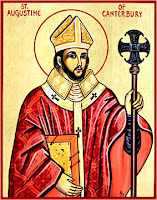 St Austin, as the English have traditionally called him, is what the East would call an Isapostolos, equal to the Apostles, a title given to a Saint responsible for the conversion of an entire people. In his case, it was the English that he converted, and among them were my maternal ancestors.

Let us invoke him that England may turn from its heresy, schism, and paganism and return to the Bosom of Christ's Church!

An Italian Benedictine monk who became the “Apostle of the English,” Saint Augustine of Canterbury is honored by the Catholic Church on May 26.Under the direction of Pope Saint Gregory the Great, Augustine founded the famous See of Canterbury and preached the Catholic faith to the country's Anglo-Saxon pagans during the late sixth and early seventh centuries.He is not be confused with the earlier St. Augustine of Hippo, the famous author of the “Confessions” and “City of God.”Augustine's date of birth cannot be established, nor are any details of his early life known. Most likely born in Rome, to a noble family, he entered monastic life as a young man. The community he joined had been recently founded by a Benedictine monk named Gregory, who would go on to become Pope and eventually be

known as St. Gregory the Great. The friendship between Gregory and Augustine had great historical consequences, as it was the Pope who would eventually send his fellow monk to evangelize England.Around 595, five years into his 14-year pontificate, Pope Gregory set to work on a plan for the conversion of the English people. The Catholic faith had already been preached and accepted among England's original Celtic inhabitants, in earlier times; but from the mid-fifth century onward, the country was dominated by Anglo-Saxon invaders who did not accept Christianity, and were not converted by the small number of isolated Celtic Christian holdouts. Thus, England largely had to be evangelized anew.For this task the Pope chose a group of around forty monks – including Augustine, who was to represent the delegation and communicate on its behalf. Though he was not explicitly chosen as its leader at that time, that was the role he ended up taking on with Gregory’s support. The group left for England in June 596, but some of the missionaries lost their nerve after hearing fearsome reports about the Anglo-Saxons. Augustine ended up returning to Rome, where he got further advice and support from the Pope.Persuaded to continue on their way, the missionary-monks reached their port of departure and set sail for England in spring of 597. After arriving they gained an audience with King Ethelbert of Kent, a pagan ruler whose Frankish wife Queen Bertha was a Christian. Speaking with the king through an interpreter, Augustine gave a powerful and straightforward presentation of the Gospel message, speaking of Christ’s redemption of the world and his offer of eternal life.Ethelbert would later convert, and eventually even be canonized as a saint. But his initial response to Augustine’s preaching was only mildly positive: he would receive the missionaries with hospitality, and permit them to evangelize without any restriction. Despite his early ambivalence, however, the king became a generous patron of the monks. They made their home in Canterbury, after dramatically entering the city in procession with the Cross and an image of Christ.The Canterbury community lived according to the Rule of St. Benedict, as they had in Italy, but they also preached in the surrounding area in accordance with their mission. Augustine and his companions succeeded in converting King Ethelbert himself, while Queen Bertha also became more zealous in her practice of the faith after her husband’s baptism. Augustine traveled to Gaul, where he was consecrated as a bishop for the English Church. By Christmas of 597, over ten thousand people were actively seeking baptism from the missionaries.Through his written correspondence, Pope Gregory continued to guide the work of Augustine – the first Archbishop of Canterbury – and the other Catholic missionaries. The great Pope, and the “Apostle of England,” would both die during the same year, 604.Though Augustine had not managed to sort out some disagreements with the native Celtic bishops, he had given the faith a firm foothold among the Anglo-Saxons. Canterbury would continue on for centuries as the ranking see of English Catholicism, until its fall into heresy and schism during the 16th century.

At the end of the sixth century anyone would have said that Augustine had found his niche in life. Looking at this respected prior of a monastery, almost anyone would have predicted he would spend his last days there, instructing, governing, and settling even further into this sedentary life.

But Pope St. Gregory the Great had lived under Augustine's rule in that same monastery. When he decided it was time to send missionaries to Anglo-Saxon England, he didn't choose those with restless natures or the young looking for new worlds to conquer. He chose Augustine and thirty monks to make the unexpected, and dangerous, trip to England.
Missionaries had gone to Britain years before but the Saxon conquest of England had forced these Christians into hiding. Augustine and his monks were to bring these Christians back into the fold and convince the warlike conquerors to become Christians themselves.
Every step of the way they heard the horrid stories of the cruelty and barbarity of their future hosts. By the time they had reached France the stories became so frightening that the monks turned back to Rome. Gregory had heard encouraging news that England was far more ready for Christianity than the stories would indicate, including the marriage of King Ethelbert of Kent to a Christian princess, Bertha. He sent Augustine and the monks on their way again fortified with his belief that now was the time for evangelization.
King Ethelbert himself wasn't as sure, but he was a just king and curious. So he went to hear what the missionaries had to say after they landed in England. But he was just as afraid of them as they were of him! Fearful that they would use magic on them, he held the meeting in the open air. There he listened to what they had to say about Christianity. He did not convert then but was impressed enough to let them continue to preach -- as long as they didn't force anyone to convert.
They didn't have to -- the king was baptized in 597. Unlike other kings who forced all subjects to be baptized as soon as they were converted, Ethelbert left religious a free choice. Nonetheless the following year many of his subjects were baptized.

Augustine was consecrated bishop of the English and more missionaries arrived from Rome to help with the new task. Augustine had to be very careful because, although the English had embraced the new religion they still respected the old. Under the wise orders of Gregory the Great, Augustine aided the growth from the ancient traditions to the new life by consecrating pagan temples for Christian worship and turning pagan festivals into feast days of martyrs. Canterbury was built on the site of an ancient church.
Augustine was more successful with the pagans than with the Christians. He found the ancient British Church, which had been driven into Cornwall and Wales, had strayed a little in its practices from Rome. He met with them several times to try to bring them back to the Roman Church but the old Church could not forgive their conquerors and chose isolation and bitterness over community and reconciliation.
Augustine was only in England for eight years before he died in 605. His feast day is celebrated on May 26 in England and May 28 elsewhere. He is also known as Austin,a name that many locations have adopted.