Will wonders never cease!? Francis has appointed a Catholic to head the Sacred Congregation for the Doctrine of the Faith, once known as the Holy Office of the Inquisition. 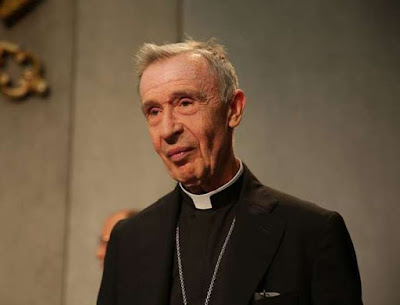 “The Church has always recognized herself bound by this decision of the Lord, which excludes that the ministerial priesthood can be validly conferred on women.”

Taking this into account, as well as Pope St. John Paul II’s 1994 apostolic letter Ordinatio Sacerdotalis, which states that all Catholics must “definitively” follow this teaching, Cardinal-elect Ladaria said, “it is a matter of serious concern to see the emergence in some countries of voices that question the finality of this doctrine.”

To argue that the Church’s prohibition on women priests has not been defined “ex cathedra” and that a pope or council could change the teaching in the future “creates serious confusion among the faithful,” and undermines the authority of the magisterium, he said.
Cardinal-elect Ladaria spelled out several reasons why the Catholic Church cannot ordain women to the priesthood, the first being that it is part of the substance of the sacrament of holy orders that the person receiving ordination be a man. And the Church cannot change this substance because the sacraments, as instituted by Christ, are the foundation of the Church.

Contrary to what some have argued, this limit on holy orders, Ladaria explained, does not prevent the Church from being effective in her ministry, because if the Church cannot change something, it is because “the original love of God intervenes on that point.”

God is “at work in the ordination of priests, so that the Church always contains, in every situation of her history, the visible and efficacious presence of Jesus Christ ‘as the principal source of grace,’” he said, quoting Pope Francis’ apostolic exhortation, Evangelii Gaudium.

Following the tradition of the Catholic Church in this teaching is a matter of obedience to the Lord, he continued, noting that the Church is called to deepen her understanding of the sacramental priesthood: that the priest stands “in the person of Christ” and is a spouse of the Church, making his being a man an “indispensable part” of the sacrament.

Cardinal-elect Ladaria pointed to the fact Benedict XVI and Pope Francis have both confirmed Pope St. John Paul II’s teaching in Ordinatio Sacerdotalis, on the impossibility of ordaining women in the Catholic Church.

In a press conference aboard the papal plane returning from Sweden Nov. 1, 2016, Pope Francis said: “On the ordination of women in the Catholic Church, the last clear word was given by St. John Paul II, and this remains.”

Cardinal-elect Ladaria also wrote about the example of the Blessed Virgin Mary, who is the most “complete figure” in the Church’s history though she was never an ordained minister.

“Thus we see that the masculine and the feminine, the original language that the creator has inscribed in the human body, are taken on in the work of our redemption,” he said.

“Precisely the fidelity to the design of Christ on the ministerial priesthood allows, then, to deepen and further promote the specific role of women in the Church, given that ‘in the Lord, neither man is without woman, nor woman is without man’ (1 Corinthians, 11:11).”

The Catholic Church can also bring light to the culture concerning “the meaning and the goodness of the difference between man and woman,” he continued.

“In this time, in which the Church is called to respond to the many challenges of our culture, it is essential that [the Church] remains in Jesus, like the branches in the vine,” Cardinal-elect Ladaria said, quoting Jesus’ words from the Gospel of John: “If you keep my commandments, you will remain in my love.”

“Only fidelity to his words, which will not pass, ensures our rooting in Christ and in his love,” he concluded. “Only the acceptance of his wise design, which takes shape in the sacraments, reinvigorates the roots of the Church, so that it may bear the fruit of eternal life.”
Posted by Jovan-Marya Weismiller, T.O.Carm. at 17:03