An End to Corporate-Government Collusion

Whilst I agree wholeheartedly with all of Mr Campbell's points, I especially appreciate the first, restoring justice for 'white collar crimes'. I am reminded of a verse in Woody Guthrie's song 'Pretty Boy Floyd':


Yes, as through this world I've wandered, I've seen lots of funny men; Some will rob you with a six-gun, And some with a fountain pen.

And, in point four, his idea of ending the 'revolving door' is vital! As long as corporate executives are tapped to head the Departments responsible for regulating their industries, and are assured of returning directly to their cushy job, or to a high paid lobbyist position for the industry, there is no hope of ending the crony capitalist government.

From the Distributist Review

The classic definition of fascism is a situation in which Big Business and Big Government are formally united in their aims and in many aspects of their administration. Government directs business toward what and how much to produce, and business looks to the authority of government to establish and protect its interests. Unlike communism, where the state owns industry, with fascism the state is independent from industry, but becomes its biggest customer. The aims of the two coalesce.
In Mussolini’s Italy, government officials and corporate heads often held conferences to decide what “they” were going to do with production in a given period. Because of this legal collusion, fascism has been defined, even by its own adherents, as “national corporatism.”
We certainly do not have de jure fascism in the United States, but when we have so much collusion between the public and private spheres at every level of government, and in many cases the same individuals running things in both spheres, with identical aims, can it not be legitimately argued that what we have in the United States is a quasi-fascist system, an arrangement which increasingly resembles fascism as both government and business get larger while subsidiarity is stamped out?
How do we change this climate?
Too often petty criminals are given harsh sentences for stealing paltry amounts of money or possessing nominal quantities of drugs, while corporate criminals making out with billions of dollars (at the cost of thousands of jobs) frequently get away with minimal punishment. Stealing billions and driving the economy into the ground should be held criminally liable for their recklessness with prison terms at least as harsh as those meted out to small-time crooks.
While limited liability is helpful in encouraging entrepreneurs to take the risks, there should be extension boundaries to its legal designation. The calculations made by entrepreneurs driving small businesses are very different from those taken by executives in Fortune 500 companies. If the millionaire hedge fund managers and bankers who orchestrated the 2008 meltdown knew they could be held, to some extent, personally liable for damaging client portfolios with irresponsible investments, the meltdown might not have gone down the way it did.
The lucrative and absurd 100% (12-year) abatement should be done away with altogether; instead, abatements should be capped at 10%, and this should simply be a flat rate available for any new business start-up, or to an existing business that, say, merits an abatement for operating a decade or longer. The duration of the abatement ought to be lowered to seven years, rather than twelve.
Another option might be to eliminate abatements altogether, or at least for businesses grossing over $2 million in annual sales. This ensures decisions are not made strictly at the behest of the largest firms. If a business does receive an abatement, it should be forbidden from challenging its tax record at state tax tribunals for a period of at least five years from the termination of the abatement; this would end the practice granting lucrative abatements only to have corporations turn around and sue municipalities when the abatement ends.
“But how would corporations make their needs known to their duly elected representatives?” some might ask. The same way everybody else does: write letters to your representatives, make phone calls, sign petitions, send emails. We all communicate this way without having recourse to professional hired lobbyists. This will ensure corporations do not have special access to government unavailable to the rest of us.
This idea does suffer from a major drawback in that it is practically unenforceable. How would we tell who is or isn’t a lobbyist, what sort of communication would constitute lobbying, and what sort of enforcement mechanism would we need to catch offenders?
It is impractical to ban the activity entirely. But it could be regulated much more severely: for one thing, the revolving door needs to end. Many businesses already have “non-compete” forms that employees must sign, and this principle could be extended to lobbying—no legislator would be permitted to work as a lobbyist for ten years after the expiration of his legislative term (similar to the law they used to have in the Roman Republic), while any registered lobbyist would have to wait a similar period before he could stand for public office. This would do much towards breaking down the revolving door phenomenon.
Furthermore, there could be inaugurated a graduated system of lobbying fees for registering lobbyists. For companies with tax returns showing a gross annual income of $500,000 or less, the fee is waived. This at least ensures that, theoretically, smaller businesses can afford to register a lobbyist if they wanted to. But the biggest benefit of a graduated system of fees is not what it does for smaller businesses, but rather how it deals with the large. For companies grossing between $500K-$1million, the fee could be $1,000 annually (akin to what most states charge now). That figure could go up:

The fee registers an individual as a lobbyist and does not take into account the salary the company would have to pay them. Furthermore, these fees are for each individual lobbyist—so if Wal-Mart wanted to hire ten lobbyists to represent it in Washington for five years, we would take a look Wal-Mart’s gross annual sales, which is approximately $405 billion. This puts Wal-Mart in the highest category, at $25 million per lobbyist per year. That would be $25 million x 10 lobbyists = $250,000,000 in fees Wal-Mart would have to spend to register these lobbyists. But then, since the registration needs to be renewed every year and Wal-Mart wants these lobbyists working on a five-year timetable, this brings their total registration fees to $1.25 billion dollars to hire ten lobbyists for five years.
This scale would no doubt discourage large companies from flooding Washington with gobs of lobbyists and would encourage smaller-sized businesses to get into the game. But the best part is, a percentage of these fees (50%?) would return to the state, county and municipality where the company is headquartered in order to make sure that a portion of that money is going to be reinvested in the community that hosts that corporation. For example, in my hometown we have one large multinational corporation that grosses about $35 million annually. If this corporation hired a lobbyist, $50,000 of their registration fees would come back to the community every single year.
In our current state of affairs, we have a real and vital collusion between Big Government and Big Business united by Big Finance. This is an inherently dangerous position for our society to be in, as the common good is subordinated to the private good of business through business’s intimate relationship with government. We can’t trust our economy and society to the whims of big businesses, nor our government, when they make decisions in the interest of corporate behemoths. 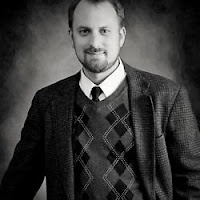 Phillip Campbell
Phillip Campbell holds a BA in European History from Ave Maria University and a certificate in Secondary Education from Madonna University. He has a background as a Youth Director and RCIA instructor. He teaches history and Scripture for the St. Augustine Homeschool Enrichment Program and Homeschool Connections. He is the author of several books and articles, most notably through his blog and website Unam Sanctam Catholicam. From 2011 to 2015, he served as the Mayor of Howell, MI. Phillip and his wife of fourteen years homeschool their five children.