Only my Canadian readers will really appreciate this! KD is the national dish of Canada! 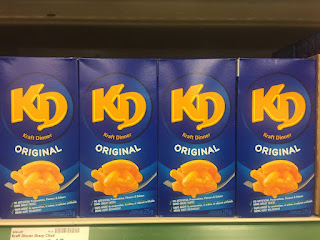 TORONTO – In a startling revelation yesterday, a team of scientists at the University of Toronto released a report providing irrefutable evidence that a single box of Kraft Dinner, contrary to its recommended serving suggestion, has never actually fed four people.

“We’ve done all the tests and analyzed the numbers countless times, but after a gruelling five-year study, we can safely say that those serving sizes are, as they say in the scientific community, bullshit,” explained team leader Tom Hendricks. “Anyone trying to divide a box of this stuff into four portions is going to starve to death.”

The truth about KD’s serving size was met with surprise that the meal was ever supposed to be divided into portions at all. When presented with the information, lifelong Kraft Dinner enthusiast Kristen Aikens was appalled.

“It… it’s supposed to feed four people?” the 30-year-old waitress asked, an expression of horror slowly growing over her face. “It’s not just meant to be dinner for one person that you eat directly out of the pot? My god. What have I done? I mean- uh- obviously I knew that. Who would eat an entire box of that stuff? Not me every weekend, that’s who. Now if you’ll excuse me, I have to go live at the gym for the next year.”

When asked for a comment, John Cahill, CEO of Kraft Foods, refused to confirm nor deny the absurdity of Kraft Dinner’s proportions.

“Look, let’s focus on the positive here,” he insisted, proudly shovelling a forkful of neon-hued pasta into his mouth. “A single serving provides all your required nutrients for the day: carbohydrates, good Canadian Dairy… uh, the colour orange. As to the sizing, maybe people were smaller in the 1930’s, I don’t know.”

At press time, the scientists had moved on to solving the mystery of why people are physically unable to eat just one Lay’s potato chip.
Posted by Jovan-Marya Weismiller, T.O.Carm. at 14:49