Of course, cops who protest, on duty and in uniform, for leftist policies are left alone in the first place. 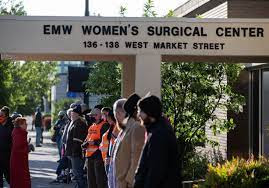 The city of Louisville, Kentucky, is paying a local police officer a $75,000 settlement after he was suspended for praying outside an abortion facility, according to the firm representing him.

Officer Matthew Schrenger was off duty when he stopped to pray with his father on the public sidewalk outside the EMW Women’s Surgical Center nearly a year ago, on Feb. 20, according to the Thomas More Society. Schrenger arrived in the early morning, before the abortion provider opened, as part of 40 Days for Life, an international grassroots campaign dedicated to ending abortion through prayer and fasting.

Matt Heffron, senior counsel for the Thomas More Society, previously said that Schrenger, a 13-year police veteran, was praying the Rosary, according to the local Fox affiliate, WDRB News.

For his actions, Schrenger was suspended for more than four months with pay, stripped of his police powers and placed under investigation, a Jan. 27 press release by the Thomas More Society read.

According to a letter last June obtained by WDRB News, the Louisville Metro Police Dept. expressed concern that Schrenger wore his full uniform while participating in “protest activity,” but acknowledged that he attempted to cover it up with his coat.

Surveillance video obtained by WDRB showed Schrenger praying and walking outside of the facility for an estimated 45 minutes and carrying a “pray to end abortion” sign at one point, the outlet reported.

The settlement comes three months after Schrenger sued the city’s mayor, police chief and police department in a federal lawsuit filed by the Thomas More Society with Blaine Blood, a Louisville attorney, in October.

Schrenger’s attorney, Heffron, called the city’s actions against the 13-year police veteran “a significant and inexcusable violation of a loyal officer’s constitutional rights.”

“The unfair discipline revealed undeniably content-based discrimination against Officer Schrenger’s personal pro-life views and violated his First Amendment rights,” Heffron said. “He did not engage in any political protest on duty – he prayed quietly. Yet Officer Schrenger was punished for this peaceful, private behavior.”

He accused the police department of a double standard.

“The treatment of Officer Schreger was particularly galling considering other Louisville police officers previously had marched, while on duty and in uniform, in political protests that apparently were approved by the police department,” he said. “He was treated very differently than other officers who had undeniably engaged in true political protest and activism while participating in LGBT and Black Lives Matter demonstrations.”

According to the Thomas More Society, open-records requests showed that those other officers faced no suspension or any kind of discipline whatsoever.
Posted by Jovan-Marya Weismiller, T.O.Carm. at 17:20