Today is the Feasts of the Three Holy and Great Hierarchs: Basil the Great, Gregory the Theologian and John Chrysostom; and of the Holy Hieromartyr Hippolytus and those with him.
✠✠✠✠✠ 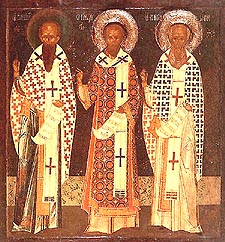 Synaxis of the Three Hierarchs: Basil the Great, Gregory the Theologian and John Chrysostom: During the eleventh century, disputes raged in Constantinople about which of the three hierarchs was the greatest. Some preferred Saint Basil (January 1), others honored Saint Gregory the Theologian (January 25), while a third group exalted Saint John Chrysostom (November 13).

Dissension among Christians increased. Some called themselves Basilians, others referred to themselves as Gregorians, and others as Johnites.

By the will of God, the three hierarchs appeared to Saint John the Bishop of Euchaita (June 14) in the year 1084 and said that they were equal before God. “There are no divisions among us, and no opposition to one another.”

They ordered that the disputes should stop and that their common commemoration should be celebrated on a single day. Bishop John chose January 30 for their joint Feast, thus ending the controversy and restoring peace.
Troparion — Tone 1

Let us who love their words come together, honouring with hymns, the three greatest luminaries of the Three-Sunned divinity: / Basil the Great, Gregory the Theologian, together with the renowned John Chrysostom, of golden speech. / They have illumined the entire world with the rays of divine doctrines; / they are sweetly-flowing rivers of wisdom, / who with divine knowledge have watered all of creation with clear streams; / for they always intercede with the Trinity for us.
Kontakion — Tone 2

O Lord, You have received the Holy and God-proclaiming heralds, the crown of Your Teachers, / for the enjoyment of Your good things and for repose; / for You have accepted their sufferings and labours above every sacrifice, / for You alone glorify Your Saints.
✠✠✠✠✠ 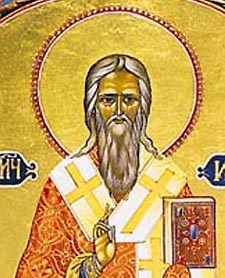 The Hieromartyr Hippolytus, and the Martyrs Censorinus, Sabinus, Chryse the Virgin and 20 others suffered during the third century.
When Saint Hippolytus, Bishop of Rome, learned of the suffering of the martyrs, he appeared before the governor despite his advanced years and rebuked the torturers for their inhumanity. The enraged governor sentenced the holy bishop to be tortured. After long torments, they tied him hand and foot and threw him into the sea.

Saint Censorinus was a high-ranking magistrate during the reign of the Roman emperor Claudius II (268-270). He was arrested and thrown into prison for his faith in Christ. By the grace of the Lord Jesus Christ he raised up a dead man. As a result, twenty soldiers and prison guards were converted to Christ. They were beheaded with Saint Censorinus. Then the virgin Chryse was brought for interrogation. She bravely confessed herself as a Christian and was subjected to torture. They lashed her sides and burned the wounds with candles. Then she was stretched out on the ground and beaten with heavy clubs. Not content with this, they broke her jaw with a rock and her back with leaden balls. Although she was covered with wounds, she confessed her faith as she was dying. So cruel was the brutality of her murderers that they tied a large stone around her neck and threw her into the sea.

Saint Chryse was thrown into the deep, but the newly-slain bride emerged from the ocean and entered the heavenly Bridal-Chamber. Although her body disappeared into the water, her memory remains eternal and immortal, even more, golden than her illustrious name. [Footnote: Chryse means “golden.”]

Saint Sabinus was the servant of Saint Chryse. The depraved idolaters beat him mercilessly with heavy leaden balls on his neck, then they hung him up on a tree and burned his entrails. After giving thanks to God, he surrendered his soul to Christ.

All these Roman martyrs suffered in the year 269. The relics of the Hieromartyr Hippolytus were put in the church of the holy Martyrs Laurence and Pope Damasus in Rome. Saint Hippolytus was a disciple of Saint Irenaeus, Bishop of Lugdunum (Lyons in France), and he is also renowned as a Christian theologian who wrote many treatises against the heretics.

Saint Hippolytus compiled a Paschal Canon, the famous Apostolic Tradition, “On Christ”, and a “Treatise on the Antichrist.” Saint Hippolytus also wrote many commentaries on Holy Scripture, on the Biblical Books: Genesis, Exodus, Proverbs, Ecclesiastes, the Song of Songs, and on the Gospels of Matthew, Luke and John, and on the Prophets Isaiah, Ezekiel, Daniel, Zechariah, on the Psalms of David and on the Apocalypse. Part of his works is preserved only in fragments. His discourses, devoted to the Theophany and the Prophet Daniel, are preserved in full. His discourses demonstrate his masterful style of preaching. He was one of the last Western Fathers to write in Greek.
Troparion — Tone 4

Your holy martyrs, O Lord, / through their sufferings have received incorruptible crowns from You, our God. / For having Your strength, they laid low their adversaries, / and shattered the powerless boldness of demons. / Through their intercessions, save our souls!
Posted by Jovan-Marya Weismiller, T.O.Carm. at 00:06