An obituary for Alice von Hildrebrand who died this past Friday. Memory Eternal!

The legacy of Alice von Hildebrand, a close friend and frequent guest on EWTN, lives on in the lives she touched and in the hearts and minds of those she continues to inspire. 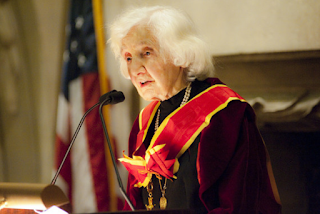 “With sadness suffused by joy, I write to share that our beloved friend and sister Alice von Hildebrand went home to the Lord at 12:25am this morning. She died peacefully at home after a brief illness,” wrote Hildebrand Project Founder and President John Henry Crosby in a Jan. 14 death announcement.

“Those who knew Lily often heard her say that the wick of her candle was growing ever shorter. In fact, she yearned for death — to see the face of Our Lord, to be reunited at last with her husband Dietrich, her parents, her dearest friend Madeleine Stebbins — with the peace that only true innocence and profound faith can grant.”

Von Hildebrand was born Alice Jourdain in Belgium in 1923. She fled Europe during World War II, arriving in New York City in 1940. Soon after, she met renowned personalist philosopher Dietrich von Hildebrand. She recalled being immediately impressed by Dietrich’s dedication to truth and wisdom.


“The moment he opened his mouth, I knew that it was what I was looking for: the perfume of the supernatural, the radiant beauty of truth, the unity of all values: truth, beauty, and goodness,” von Hildebrand wrote in her 2014 autobiography, Memoirs of a Happy Failure.

She was a philosophy student of Dietrich’s for several years before the pair were married in 1959.

Von Hildebrand spent the majority of her career teaching philosophy at Hunter College in New York City, beginning in 1947. Though she described the secular college as radically anti-Catholic, von Hildebrand was well-liked among her students and even inspired several of them to conversion.

“In secular universities, the word ‘objective truth’ triggers panic,” she wrote in her autobiography. “God said, ‘I know you do not belong there,’ as my colleagues repeated time and again. ‘But, I have work for you to do, and you cannot do it on your own. I will help you.’”


In 1984, von Hildebrand retired from Hunter College after 37 years and she was awarded the college’s Presidential Award for excellence in teaching.

Von Hildebrand published several books during her lifetime including The Privilege of Being a Woman and The Soul of a Lion: The Life of Dietrich von Hildebrand. She also wrote countless articles and essays and helped launch the Hildebrand Project to promote her late husband’s work.

She was a frequent contributor to Catholic News Agency, the National Catholic Register and made more than eighty appearances on parent company the Eternal Word Television Network (EWTN).

In 2016, she wrote a passionate article for the Register about Mother Angelica highighting her feminine genius. Writing that she and Mother Angelica were "almost twins," von Hildebrand reflected on the foundress of EWTN: "Mother Angelica’s amazing life clearly tells us that humility (pauper et inops sum ego) and a heart burning with love can conquer the world."


“We are grateful for the many contributions she made to Catholic thought and for the many programs she made for EWTN over the years,” said EWTN Chaplain Father Joseph Wolfe. “May she enjoy her eternal reward and the joy of being reunited with her dear husband Dietrich, whom she so admired.”

“She not only made more than 80 appearances on EWTN, but left probably her most important body of essays in the set of articles she wrote exclusively for CNA,” Bermudez said. You can read her work for CNA here.

In a 2014 interview with CNA, von Hildebrand reflected that her life looked radically different than the one she expected.

“God has chosen the pattern of my life - totally different from what I had imagined. I feel like the female Habakkuk brought into the lion's den,” she said.

“When I look back on my life, the words that come to my mind from my heart are: misericodias domini in aeternum cantabo,” citing Latin words from the Psalms which translate to “I will sing the mercies of the Lord forever.”
Posted by Jovan-Marya Weismiller, T.O.Carm. at 14:26