I had not realised that Luthien had wanted to delay her conversion until just before the wedding but Beren said no. Fascinating story.

From Fishing in the Tiber 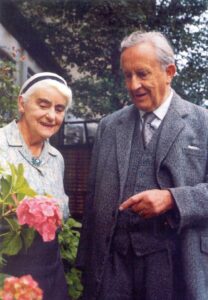 Tolkien's mother, Mabel, converted to Catholicism despite serious opposition from her family. She was eventually cut-off financially when she refused to abandon her new faith. The lack of financial support was a serious consequence as she relied on her family's assistance after her husband died working in South Africa leaving her alone to raise their two young boys. Yet, she valued her Catholic faith above all else and was determined to raise her children in the Catholic Church, which she did.

Years later, when Tolkien was a young man at Oxford and was ready to marry, his future wife, Edith, was still a very active member of the Church of England. Tolkien insisted that she become Catholic before they marry. Edith was willing and believed it the right thing, but wanted to delay her conversion until just prior to the wedding to avoid the backlash of her family. Tolkien, would not have it. He stated that the Church of England was "a pathetic and shadowy medley of half-remembered traditions and mutilated beliefs" and if Edith were persecuted for becoming Catholic, why then, that was precisely what happened to his own dear mother, and she had endured it. He went on to say, "I do so dearly believe, that no half-heartedness and no worldly fear must turn us aside from following the light unflinchingly." Edith agreed and was met with the same level of opposition from her family as Tolkien's mother had suffered through.


J.R.R. Tolkien is best remembered for his fiction, but the most important thing to him was truth.