You Cannot Kill Tradition: A Brief Statement in Response to the Motu Proprio 'Traditionis Custodes'

From The Catholic Gentleman 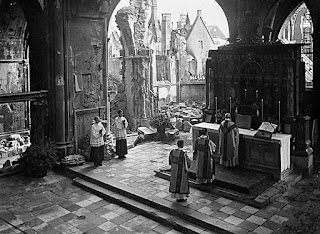 The Catholic church was today thrown into turmoil by the publication of a motu proprio, Traditionis Custodes, that in essence reverses the motu proprio Summorum Pontificum of Pope Benedict XVI and places heavy restrictions on the celebration of the traditional Latin Mass. Further, for all practical purposes, the traditional Mass is abrogated as a legitimate expression of the Roman Rite, though celebrations will be tolerated on a limited basis. The Novus Ordo Missae is now considered the only legitimate expression of the Roman Rite. The mood is heavy in response to this draconian measure, and reactions from faithful Catholics who love the traditional Roman Mass have varied from deep grief, to anger, to bitter disillusionment.

At the Catholic Gentleman, I have striven to avoid polemics or commentary on the latest headlines since the beginning, seeking instead to inspire in followers a love of the good, the true, and the beautiful. But this attack on the traditional Mass, which has sustained my faith through all the storms of life since my conversion ten years ago, is grievous, and I believe it requires at least some response.

In short, I believe this attack on the living tradition of the faith is grievous, disastrous, and wrong. Here are three simple reasons.

First, with a few notable exceptions, traditional communities and religious orders are the only ones that are growing. Admittedly, this statement is largely anecdotal, but parish closures and consolidations are commonplace in the great majority of dioceses. Vocations have plummeted in recent decades, and it is not unusual for overworked priests to be managing three or more parishes at one time. Meanwhile, my traditional parish, and every traditional parish I have ever visited, is bursting at the seams and running out of room. One parish I visited on a recent business trip offers five masses per Sunday, with each Mass filled to capacity. This does not include people occupying an overflow room. Likewise, traditional religious orders, like the monastery near where I live, have to turn people away because they have no more room available.

The wonderful thing is, this growth is entirely organic and the product of the profound attraction of tradition. Most of these communities and religious orders don’t have vast sums of money at their disposal, nor do they have many high-ranking patrons in the hierarchy. They simply grow steadily as people discover that Catholicism has profoundly rich treasures of tradition to offer. In an age of ecclesial decline, this rapid, organic growth should be a sign of hope and a reason for celebration for the church, including prelates who at least profess to be concerned about evangelization and growth.

Second, this will tragically only increase division In the Church rather than heal it. Traditional Catholics number in the hundreds of thousands, maybe even millions by now, and they are a growing percentage of faithful, Mass-going Catholics. In many cases, they are the ones most passionately in love with their faith–something that again should encourage any bishop who remotely cares about the future of the Church. Recognizing the pain the misguided suppression of tradition caused following Vatican II, Pope Benedict attempted to heal a painful wound in the Church with Summorum Pontificum. This new motu proprio undoes all the progress that was made in the last 14 years. The war in the church will only grow more bitter, as factions entrench themselves behind polemical walls. Many will experience a crisis of faith, and even vocations to the priesthood may be lost.

There is so much hostility to the faith outside the Church, but this can be withstood if you know you have a safe haven to worship and pray within the Church. Thus, it is severely painful to experience attacks from our own hierarchs. And regardless of the talking points, this feels like an attack. Many faithful Catholics I know feel betrayed by this decision, as if everything they love about the faith has been undermined and delegitimized yet again. This makes things so much worse, not better. It will heal nothing, only tear the bandages off of wounds that were just starting to heal.

Third, this act further wounds trust in our leadership. The church has been reeling for decades from sexual and financial abuse scandals that devastated the trust of the faithful. Rather than addressing this internal rot, however, our leaders seem more interested in crushing traditional Catholics who have stayed faithful to Christ in the Catholic Church despite the deep pain and disillusionment they feel. Do they really have our best interest at heart?

With all the possible problems in the church that the Pope could have addressed strongly and firmly, it is staggering that the growth of tradition is what he chose to clamp down on. Where is the mercy, tenderness, and pastoral care for traditional Catholics? This measure is by all definitions draconian. Moreover, this strong rebuke to Summorum Pontificum was promulgated while the pope’s predecessor is still alive, an act which shows a grave disrespect for the former pontiff and what he was trying to accomplish. There was a time when Popes at least attempted to show continuity with their predecessors on faith and morals. It seems that is no longer worthy of striving for.

In conclusion, this motu proprio will no doubt dampen the growth of tradition in the short term. But there is no question in my mind that it will not eliminate it. Tradition is vital and alive. It is the soul of the Church. You cannot kill it. Why? Because it is not just a fabricated set of “rites” or humanly concocted forms of worship that we can change at a whim. The Mass is a living symbol of spiritual realities that participates intimately in the realities which it reveals. Every gesture, every word has an inner life that corresponds to a spiritual reality that is made present in time. Such a living symbol is sustained from above and can only be treated with the greatest reverence, the reverence you would bring to a living organism. Therefore, the traditional Roman Mass has a life of its own that cannot be extinguished by any human effort.

We care about the Mass because we love Christ, and Christ is made present to us in the Mass. Nothing could be more significant, nothing more profound. There is much more that could be, and no doubt will be, said, but I will conclude here.

May the God of all peace sustain us in these difficult times, and may we never lose heart.