'The whole story, it seems, was concocted to stir up hatred against Christians and stoke outrage. It succeeded', with dozens of Churches burned across the country. 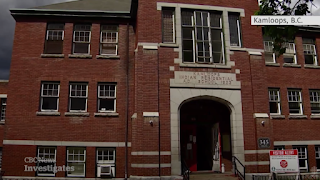 The whole story, it seems, was concocted to stir up hatred against Christians and stoke outrage. It succeeded.

emember last summer when a mass grave containing the remains of hundreds of children was found on the grounds of a former government boarding school for indigenous children in British Columbia, Canada?

In the seven months since this shocking news broke, not one body has been found, and not a single shovel-full of dirt has been excavated from the site in question. Contrary to the worldwide media coverage last summer, nothing, in fact, has been “discovered” on the grounds of the Kamloops Indian Residential School.

In a healthy society, this would be a scandal. A story that grabbed headlines for a week and inspired arson attacks that destroyed dozens of churches in Canada turns out to be based on flimsy, unexamined evidence at best, and an outright, pernicious lie at worst.

You might remember the overblown coverage. CNN breathlessly reported on what it called the “gruesome discovery.” The Canadian Broadcasting Corporation appended a warning label to its coverage, saying “this story contains details some readers may find distressing.” The Washington Post declared that news of the mass grave had “dragged the horror of Canada’s mistreatment of Indigenous people back into the spotlight.” Every corporate outlet took it for granted that a mass grave containing hundreds of corpses had indeed been discovered—corpses of children, no less. They reported it as fact.

Politicians quickly fell in line. Canadian Prime Minster Justin Trudeau tweeted that the discovery “is a painful reminder of that dark and shameful chapter of our country’s history.” British Columbia Premier John Horgan said he was “horrified and heartbroken.” The Office of the United Nations High Commissioner for Human Rights called it “a large scale human rights violation,” and called on Canada and the Vatican to investigate.

Tribal leaders in Canada went further and said the discovery was evidence of “mass murder of indigenous people,” that it was an “attempted genocide.” Some of them compared the priests and nuns who ran the boarding schools to Nazis, implying that, like the Nazis, these people should answer for their crimes.

Flags were lowered to half-mast. Calls were issued for an inquiry. Important and serious people said there must be a reckoning with Canada’s racist past. Lamentations poured forth from Catholic bishops for the church’s role in running these government boarding schools.

And then came the arson. In June, dozens of churches across Canada, most of them Catholic and some of them more than a century old, were burned to the ground. No church was safe. As my colleague Chris Bedford reported at the time, “In Calgary, 10 churches of various denominations were vandalized in a single night. A few days later, a Vietnamese church was set on fire — just hours after it held its first full service in more than a year.”

Overall more than two dozen churches in Canada have been targeted over the past few weeks — and people are cheering it on. Not just anonymous people, either: On June 30, Harsha Walia, the executive director of the British Columbia Civil Liberties Association, responded to a story of another church arson, saying ‘Burn it all down.’

Others rallied to her defense. Naomi Sayers, a lawyer and blue Twitter checkmark, said ‘I would help her burn it all down … and also, I would help anyone charged with arson if they actually did burn things.’

At the heart of all this was a press release issued at the end of May by the Tk’emlúps te Secwépemc First Nation, saying that ground-penetrating radar had revealed the remains near the site of the Kamloops school, one of the largest such schools for indigenous youth that operated from the 1890s to the 1970s. “It’s a harsh reality and it’s our truth, it’s our history,” Chief Rosanne Casimir said at a news conference. “And it’s something that we’ve always had to fight to prove. To me, it’s always been a horrible, horrible history.”

The investigation was supposed to continue in conjunction with the British Columbia Coroner’s Office. The radar findings were only preliminary, and the eventual discovery of the “mass grave” containing the remains of children “as young as three years old,” which no one seemed to doubt, would confirm what “was spoken about but never documented” in the community.

That was more than seven months ago. Not a single corpse has been exhumed from the site since then. No human remains, of children or anyone else, have been found and confirmed as a result of the radar search.

The person who performed the ground-penetrating radar survey, a “conflict anthropologist” named Sarah Beaulieu, said at news conference back in July that the “probable gravesites” could not be confirmed unless excavations were done. Her investigation covered only two acres of the total 160-acre site and, she said, had “barely scratched the surface.”

Professor Jacques Rouillard, professor emeritus in the Department of History at the Université de Montréal, recently published a detailed essay in The Dorchester Review on what has been found at this and similar sites — and what hasn’t. There is no evidence, writes Rouilliard, in any of the historical records kept by the government, that deaths of indigenous children at these schools were ever covered up, or that any corpses were ever deposited in mass, unmarked graves which were kept secret, and parents of the children were never informed, as tribal groups repeatedly charged and the media dutifully repeated last summer.

There are indeed individual graves on the grounds of the Kamloops school, which includes a still actively used cemetery. Children who died at the school when it was still in operation — most often of tuberculosis but also of influenza, yellow fever, and typhoid — were sometimes buried in that cemetery in individual marked graves, alongside priests and nuns who were buried there.

The history of this and other residential schools is admittedly complex and includes, as most historical episodes do, a dark side. Often indigenous children were separated from their families and forced to attend these schools, which the government left chronically underfunded. When children died, the government often refused to pay to have their remains transported back to their communities, so they were buried at the school cemeteries.

Many of the grave-markers at these schools are now gone, not because anyone was trying to hide them but because it was common in these remote areas to make grave markers from wood, and many of them simply disintegrated over the years.

What all of this suggests, especially in the complete absence of any confirmed evidence of a “mass grave” or a coverup, is that the whole story is a giant fiction. Its purpose was to provoke a moral panic, demonize the Catholic Church, and make global headlines by peddling historical grievances. And it worked exactly as planned.

But understand this: seven months on from this manufactured moral panic, there will be no backtracking from the media, no following up about the hundreds of corpses “discovered” in a “mass grave.” There will be no questions asked, and no demands for evidence.

Ian Austen of The New York Times, for example, who back in May wrote about the nonexistent “evidence” of a “mass grave containing the remains of 215 children,” has not followed up on his reporting. The closest he came was in October, when he wrote a story about Pope Francis expressing a willingness to visit Canada for “indigenous reconciliation,” and repeated his earlier claim that, “the remains of hundreds of Indigenous children were found on the site of the former Kamloops Indian Residential School in British Columbia.”

No, they weren’t. Nothing has been found there, because no one has looked. Probably no one ever will.