More Biblical Evidence for the Eucharist

Some excellent resources for refuting modernists and Protestants when they try to deny the Real Presence of Christ, Body and Blood, Soul and Divinity in the Eucharist. 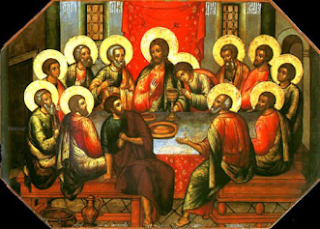 I recently began reading the New Testament again and noticed a verse that had not previously caught my attention.  The verse is from the last chapter of Mark after Jesus’ Resurrection and appearance to Mary Magdalene but before His Ascension.  The verse states, “After this, He appeared in another form to two [disciples] as they were walking into the country” (Mark 16:12, emphasis added).

When I saw that Jesus appeared to two disciples in “another form”, I immediately thought of the Eucharist.  The Catechism of the Catholic Church, quoting the Council of Trent, teaches:

Accordingly, the Church teaches that at the consecration of the bread and wine offered at Mass, Jesus appears to us in another form.

In the Old Testament, God presented Himself numerous times under the form of fire (Exodus 3:2, 13:21), and the Holy Spirit descended from heaven “in bodily form” as a dove at Jesus’ baptism (Luke 3:22).  Yet, the substance (that is, the essence) of these forms was God. Also, these forms behaved like the things they appeared to be in the natural world.

In Exodus 3, for example, the fire (God) burned the bush.  In Exodus 13, the pillar of fire (God) gave the Israelites light during the night.  In Luke 3, the dove (Holy Spirit) descended through the air on wings. Therefore, the Blood of Christ in the Eucharist can make one drunk because the outward form (wine) continues to function as the attributes of wine would naturally function, but like the previously mentioned forms, the substance is God (the Son).

The Form of the Resurrected Christ

Returning to Mark 16, on the day of Jesus’ Resurrection, He appeared in another form to His disciples.  He looked different, but His substance was the same.  Similarly, on the Mount of Transfiguration, Jesus was “transfigured” (Matthew 17, Mark 9). The Greek word for “form” in Mark 16:12 is morphē, and the Greek word for “transfigured” is metamorphoō, which means to change form.  Thus, in both incidents, Jesus changed form, but His substance remained the same.

In the more detailed account of Mark’s story, known as The Walk to Emmaus, Jesus appears to the two disciples on the road to Emmaus, but they do not recognize Him.  They have dinner together, and Jesus elucidates the Old Covenant law and prophets concerning Himself.  He then takes the bread, blesses it, breaks it, and gives it to them.  “And their eyes were opened, and they recognized Him; and He vanished out of their sight” (Luke 24:32).

Therefore, we can draw a few conclusions from these occurrences.

Although these occurrences only provide evidence for Jesus’ transformation of bread and wine into Himself, when we combine them with the following verses (and many others), we have unmistakable proof that Jesus not only can appear in other forms, but also that He does so.

Instead of denying what Scripture plainly teaches and the true Church of God consistently passes down, we must look past appearances and submit to the everlasting truth that the Eucharist is the Body and Blood, Soul and Divinity of our Lord and Savior, Jesus Christ.