Why Our Forebears Defended Latin in the Liturgy

An excellent look at what motivated the men and women of the 1960s and 70s to fight to preserve Latin in the Liturgy of the Church. 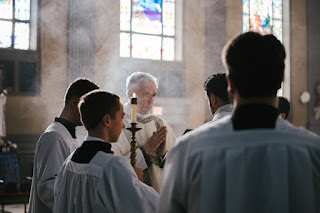 I have been reading the Traditionalist classic, Tito Cassini’s The Torn Tunic, first published (in Italian, La Tunica Stracciata) in 1967, reprinted by Angelico Press. It is an impassioned, indeed ferocious, statement of the case for liturgical traditionalism, written and published before the Novus Ordo Missae was promulgated. Casini, like most Catholics of the time, has only the vaguest idea what further changes were being cooked up. What he was objecting to was the things which had already been done, notably by the 1964 Instruction Inter Oecumenici, and the liturgical abuses which had been springing up. Casini’s focus, like that of the Latin Mass Societies and Una Voce groups which were founded as early as 1964, was the use of the Latin language.

As Casini notes, this was (or appeared to be) in direct contradiction to the Second Vatican Council’s Decree on Latin, Sacrosanctum Concilium promulgated in 1963, which states bluntly (Article 36.1) “the Latin language is to be preserved in the Latin rites.” This Decree followed the very strong defence of Latin by Pope John XXIII the previous year, in his Apostolic Constitution Veterum Sapientia, which admonishes bishops and religious superiors to be “on their guard lest anyone under their jurisdiction, eager for revolutionary changes, writes against the use of Latin in the teaching of the higher sacred studies or in the liturgy.” It was followed by the equally heart-felt pro-Latin Instruction of Pope Paul VI in 1964, Sacrificium Laudis, a document which has fallen so deeply into the memory-hole that the Latin Mass Society website hosts the only online English translation (it also forms an appendix to Casini’s book). In this context the complete disappearance of Latin, in rapid stages, alongside other hastily-formulated simplifications (the abolition of the Psalm Judica and the Last Gospel, the introduction of lay readers, etc.) is astonishing, and its effect on the people must have been enormous.

It is not surprising that the initial focus of the Una Voce movement was accordingly on Latin. Not only does the name adopted for some national and local groups, “Latin Mass Society,” reflect this, but so does the alternative, “Una Voce,” which refers to Casini’s argument, drawn from the counter-revolutionary political theorist Joseph de Maistre, that Latin is the Church’s essential bond of unity.

To hear some people talk today, all this was an unfortunate misunderstanding, because the reformed Mass can also be celebrated in Latin. But this has never been in doubt, and indeed the celebration of the Novus Ordo in Latin was a far more realistic prospect in the early days of the Traditional Movement than it is today, since now very few priests have enough familiarity with Latin even to attempt it. The celebration of Mass in the vernacular has never been made compulsory by the law of the Church; it is just something which is universally expected. The expectation is so strong, however, that it seems to have the force of law. Zealous proponents of the reform appear to hate Latin, and regard priests who want to use Latin in the revised rites as opponents of the reform. This pattern became established quickly in the 1960s, and remains with us today. Complaints about Latin creeping into Novus Ordo celebrations went to Rome in advance of Traditionis Custodes, and explicit (and probably illegal) restrictions on the use of Latin in the reformed Mass have appeared in that document’s wake, notably in Costa Rica, but we might also presume a similar intention with St Peter’s Basilica in Rome.

From the reformers’ perspective, this makes perfect sense. The reform’s purpose was to facilitate “active participation” in the liturgy. Active participation is obviously a good thing, but as Casini notes the reform is driven by a rationalistic understanding of this phrase. On that basis, anything which impedes comprehension impedes participation.

It was a long time before the detailed work could be done to analyze the lectionary and the prayers of the Novus Ordo Missae, to determine exactly what had happened, and how abrupt was the discontinuity with the Church’s liturgical tradition, even in the Latin text. The first problem for many researchers is getting hold of the Latin at all, which is not available online. A priest I know who spent some time teaching in the seminary of England’s premier diocese, Westminster, discovered that there wasn’t a single copy in the place (he got them to buy one). Once you get it in your hands, it is no simple matter to find the corresponding source texts, in order to compare them.

Work on these issues is now coming to fruition, and this has revealed the discontinuity in the texts to have been much more radical than we might have imagined. However, none of this invalidates the impression given by the reform in those heady days of the 1960s: that it is above all an attack on the liturgical experience of the faithful, on the way ordinary Catholics prayed at Mass, an attack which aims above all at Latin.

Casini describes a Mass he had “the misfortune” to experience (pp62f):

…during which, in the midst of the commands peremptorily bellowed at the congregation—sorry, “assembly”—by the curate like any sergeant-major to the company on parade—Sit!… Stand!… Kneel!… Sing! All together!… the rite was solemnly interrupted to order an old lady to “put that thing away”—that thing being her Rosary, which, scarcely able to bear the new way of praying any more, she had taken out of her bag and clasped in her hands, to give her courage—in the eyes of the new-breed curate a more heinous act than producing lipstick and powder in church, and applying it.

Casini summarizes the mindset at work in the curate with the phrase, “If I don’t understand, I don’t pray.” Those behind the reform seemed to have no conception of how lay Catholics engaged spiritually with the Church’s liturgy, and did so fruitfully in terms of conversions, holiness of life, and perseverance under persecution. How could they get anything out of it? It was in Latin!

The same idea seems to be revealed in Pope Francis’ interview with a Spanish radio station. Traditionis Custodes, he said, took certain steps: “For example, that the proclamation of the Word be in a language that everyone understands; otherwise it would be like laughing at the Word of God.”

Excuse me? The solemn proclamation of God’s words in Holy Scripture, perhaps chanted by the deacon at High Mass with candles and incense, before he takes the book to the celebrant to be reverently kissed by him – this is like laughing at the Word of God?

And since the Psalms, too, are the Word of God, what does Pope Francis make of the Latin choral Office? On the idea that this could simply be done in the vernacular, Pope Paul VI, in one of his prophetic moments, exclaimed (in Sacrificium Laudis): “It is to be feared that the choral Office would turn into a mere bland recitation, suffering from poverty and begetting weariness.”

This is precisely what the Latin liturgy avoids – being inconditus: unmade, uncouth, bland; suffering from inopia: helplessness, poverty; and begetting taedium: weariness, boredom. It is not boring to hear the priest recite the prayers of the Mass, or to proclaim the readings, or to stand, almost silently, before the altar, whispering to the Host and Chalice, because it is something whose dignity and solemnity is evident. Casini quotes St Thomas Aquinas considering whether sung liturgical texts might be more difficult to understand, and therefore to be avoided: no, he says, because “even if they do not understand what is sung, they understand why it is sung, that is, in God’s praise, and this is enough to excite devotion” (Summa Theologica IIa IIae Q.91 a.2 ad5). In a word, the Latin of the ancient liturgy, and a thousand other features of the ancient liturgy rejected by the reformers, excites devotion, through its solemn character and evocation of the sacred.

An ounce of devotion is worth a ton of intellectual comprehension. And that statement could stand as a summary of the Traditionalist case for the preservation of our ancient liturgy.