'[W]e should all the more demand the Liturgical Rites of our forefathers. If there is any "reform" it is back to the ancient Rites!' 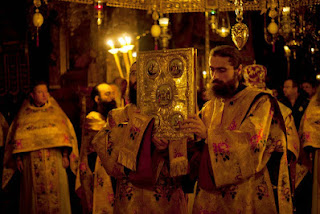 Dear Catholic friends, the Mass/Divine Liturgy/Holy Qurbana is not to be trifled with. The Holy Mysteries are organic outgrowths of a human culture, imbued with the Divine. As Our Lord Jesus Christ is both God and Man, so too, in an analogous manner, the Sacraments are both Divine and human. Divinity blesses us through seemingly natural human means: bread, wine, gesture, word, song. But these elements and more emerge from human cultures that have organically grown over the centuries. A Catholic culture will give birth to Catholic worship. Thus the Church is not a rigid mono-form, but, to the contrary, a brilliant flowering of liturgies, reflecting something of the variety of Man. Hence the Church has besides the Roman Rite, other Latin Rites (really "usages" as Davies would say): amongst them the Sarum, Dominican, Ambrosian etc. In the east, the Divine Liturgies reflect the cultures out of which (e.g.) emerged such fathers as St. John Chrysostom and St. Basil.

In our day, with the attack on the Tridentine Roman Liturgy by the Pope (an attack on the very Mass of Rome itself), we should all the more demand the Liturgical Rites of our forefathers. If there is any "reform" it is back to the ancient Rites! It was a tragedy that when the English and Welsh hierarchy was reestablished that the Sarum usage was not reinstated. Likewise it is a tragedy that the traditional Ambrosian Rite was stolen from northern Italians and Swiss by the delinquent Romans. 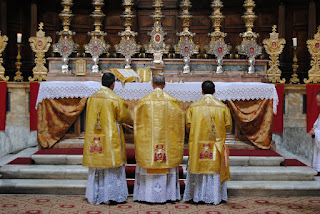 Friends, the churchmen at one point took very seriously the sacred Rites. For example, one was bound to one's Rite at birth. I might attend and love the beauty of the eastern Rites, but I cannot change my Rite unless I bring a grave reason before my bishop. When a woman married a man, she, if of a different Rite, was transferred to his Rite. Thus a Latin woman in marrying a Byzantine, became a Byzantine. In this manner the Church ensured familial unity, whilst honouring all ancient Rites.

Dear friend: you were baptised in the ancient Roman Rite, or an ancient eastern Rite? Remain faithful to your forefathers. Do not try to wander from one Rite to another like a protestant (as if you can without your bishop's permission leave your Rite!); remain in the Rite that was gifted to you by the Holy Spirit, and to which you belong. Fight for your Rite, do not betray it! For those of you baptised in the baptismal Rite created in the 1970s, return to the traditional Latin Rites of your forefathers.

Eastern Catholics do NOT trust the churchmen in Rome, they will seek to demolish your ancient Rites, as they have demolished the Rite I was baptised into. If they despise the Rites of their parents and grandparents, what care do you think they have for the Divine Liturgies brought to heavenly glory by the ancient Church fathers? Just as they brutally attacked the Mass brought to its glory by the incomparable St. Gregory the Great, so too these spiritual barbarians would seek to destroy the glorious liturgies of the equally incomparable St. Basil the Great and St. John Chrysostom.

May St. John the Evangelist, whose Feast Day is today, give us the love for the Divine Mysteries that he had. May his devotion to the Divinity of the Word made Flesh, inspire us to devotion to the ancient, sacred liturgies that reflect the Incarnation.