Cardinal Cupich on a Rampage

Blase (the Bully) Cupich is now accusing Fr Bus of St Stanislaus Kostka Church of being 'on the verge of breaking Canon Law' for his letter, which you can read here.

From One Mad Mom 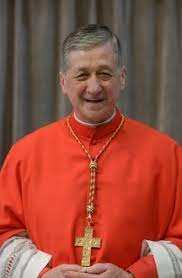 I’m loving this priest more by the second. Quite frankly, this is how it’s done!

I write with a deep-felt sorrow that my letter to Bishop Lombardo dated January 13, 2022 was interpreted by social media as though I was being unjustly critical of, disrespectful to, or lambasting the Holy Father, the Cardinal Archbishop of Chicago or Bishop Lombardo.

“Interpreted by social media” is also known as “made James Martin, SJ, mad.” Fr. Bus’ original letter couldn’t have more properly expressed his concerns, and, oh, please note that he said all along he was going to comply, as seen in his original letter. Also note that Cardinal Cupich doesn’t respond to even one of his points. “Off with his head!” is hardly a way to accompany one of his priests.

“As was stated to me, the letter verges on a violation of Canon 1373: “A person who publicly incites among subjects, animosities or hatred against the Apostolic See or an ordinary because of some act of power or ecclesiastical ministry or provokes subjects to disobey them is to be punished by an interdict or other just penalties.” Also, Canon 1369: “A person who in public show or speech, in published writing, or in other uses of instruments of social communication utters blasphemy, gravely injures good morals, expresses insults, or excites hatred or contempt against religion or the Church is to be punished with a just penalty.””

Please! Let’s pause right here, shall we? On the verge of breaking Canon Law is also known as following Canon Law. How many people get speeding tickets for being “on the verge” of speeding? They fully admitted he didn’t violate either canon, which is why they threw the “on the verge” lingo at him. “Sorry Fr. Bus, we can’t actually say that you did anything wrong, but we’re going to imply it all we can until James Martin, SJ, tells everyone that you are guilty of something we admitted you weren’t guilty of.” That’s kind of how it works these days. “We’re just going to imply whatever we can and see if we can make it stick!”

And Canon 1369?! Wow, can you say stretching? “…utters blasphemy, gravely injures good morals, expresses insults, or excites hatred or contempt against religion or the Church”? One has to wonder just who Cardinal Cupich thinks he is? Oh, rats! Did I just break 1373 by pointing that out? See what I mean? Fr. Bus in no way did anything against Canon 1369.

If my letter was interpreted by some as a violation of Canon 1373 or Canon 1369, I can assure all of you, this was not my intent. I wrote for love of the Church to whom I’ve given my life.  I have always acted for love of God and I have the deepest regard for the Papacy and the Prelates of the Church. As a priest I am bound to the Lord in service to His Mystical Body. As a priest, as with all popes, prelates, priests, and deacons, I am not above challenge.

I regret the letter was interpreted as a near violation of the Canons stated above.  I wish to state clearly that I have always held in high regard the Documents of the Second Vatican Council and the ecclesial authority of the Church.  I do not wish to add to any further division in the Church.  I do however, feel the Body of Christ is broken and I felt before Almighty God and the Blessed Virgin Mary, I had acted in a manner to assist in its healing.

Soon I will go into retreat for about ten days and reflect on my priesthood.  I will be praying for all of you and the Church Un.iversal.  I will always safeguard the peace and tranquility of our worship here at St. Stanislaus Kostka Parish – the people entrusted to my care and whom I love dearly.

Sincerely in Christ Jesus and the Blessed Virgin Mary,

Was this a surprise response by Cardinal Cupich to Fr. Bus’ letter? Nope. Not in the least. Let’s face it, Cardinal Cupich has had a bad few weeks. He doesn’t like legitimate questioning at all. How does the saying go? Shoot the first and the word will spread. This is a tactic he’s employed many times. From the second it dropped, everyone knew he’d be hauled in for a talking to, just as everyone else who stands up for the teachings of the Church in the Archdiocese of Chicago. “Go to your corner and think about it until you come to the conclusion I am right- or else!” I think Cardinal Cupich is being shown that putting people into a position to do what he wants or to do what God wants them to do might not be the wisest thing because, inevitably, some are going to choose God.

Do you want to know how McCarrick became McCarrick? This whole episode is a great example. McCarrick used the same types of tactics but, sadly, for many years, there were too few Fr. Anthony’s out there.  Cardinal Cupich has learned well, but too bad he didn’t pay attention to how the McCarrick story ended.