Anniversary of the 1707 Act of Union

Today marks the 315th anniversary of the passing of the 1707 Act of Union in the Scottish Parliament which started the final process to create the British state and united Scotland and England as one political entity.
The English Parliament passed the Act of Union on the 4th of March 1707 (Royal Assent on the 6th of March) and of course, it came into effect on the 1st of May 1707.
Following the Act of Union, the newly-formed United Kingdom went on to create the British Empire, something which historians have argued was overall a force for good!
Today is an extremely important day in British history that must be cherished! Remember it well!
Pictured below are the Acts of Union are being presented to Queen Anne by the Duke of Queensbury in 1707. 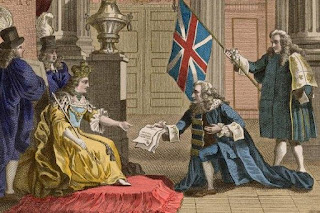