The Sacrifice of the Eucharist

From the Anglicanorum Cœtibus Society blog 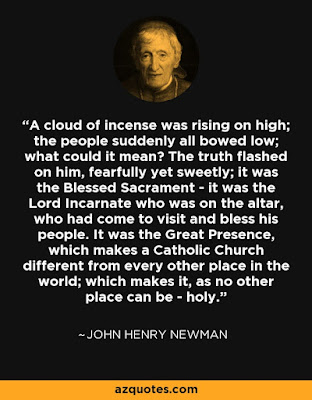 The Eucharist is the Source and Centre of Christian Life– Lumen Gentium
The above statement is the core truth of the Catholic Faith and that many in the Personal Ordinariates, created for groups of Anglo-Catholics seeking union with Rome, have sacrificed greatly for: that the celebration of the Eucharist were Christ is Truly Present is not possible with invalid Anglican orders. Communities have been split, friends turned enemies and even marriages have ended as many Anglo-Catholics sort to enter the fullness of the Catholic faith in the Catholic Church. As our Lord said:
“Do not suppose that I have come to bring peace to the earth. I did not come to bring peace, but a sword. For I have come to turn a man against his father, a daughter against her mother, a daughter-in-law against her mother-in-law a man’s enemies will be the members of his own household.’ Mark 10:34-36
The sword referred to is the sword of Truth, which always comes into conflict with falsehood: in this case you cannot truly be Catholic outside the Catholic Church. A good article of the conversion experience of an ex-Episcopalian Anglo-Catholic priest, now Catholic layman, outlines this journey of awakening.
Have you been to an Ordinariate parish? There are no more zealous Catholics than converts, and most Ordinariate parishes are entire communities of converts who have fled the Liberalism and Protestantism of the Anglican Communion, and uphold the dignity of their Eucharistic liturgy- a Form of the Roman Rite referred to as Divine Worship. If you are in the UK, Canada, USA or Australia (and Japan), there might be an Ordinariate community near you!
Posted by Jovan-Marya Weismiller, T.O.Carm. at 01:18