Busting 7 Common Myths About the Great St. Francis of Assisi

Maybe Pope Francis should read this book! It seems that the Saint he took his Regnal Name from, and who he claims to want to emulate, wasn't quite the Muslim loving, SJW, radical liturgical reformer that Francis seems to think he was. Remember, when Our Lord spoke to St Francis from the Crucifix at San Damiano, He said 'Restore My Church', not 'Sow heresy, confusion, and anxiety amongst the Faithful of My Church!' 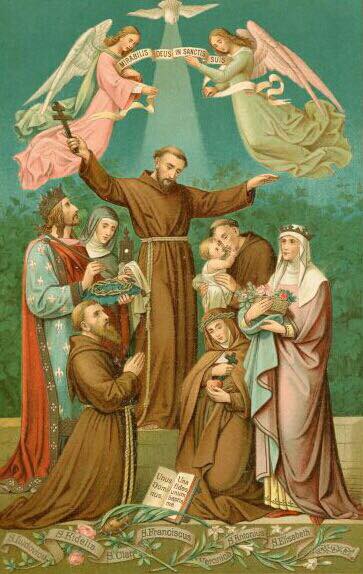 Busting 7 Common Myths About the Great St. Francis of Assisi:
St. Francis of Assisi is one of the most famous and beloved saints in the Catholic Church, but he’s also one of the most misunderstood.
Catholic scholar Samuel Gregg took to Twitter for the feast of St. Francis of Assisi this year to dispel some common myths about the saint, citing the well regarded 2012 book Francis of Assisi: A New Biography by Augustine Thompson, a history professor at the Dominican School of Philosophy and Theology, Graduate Theological Union, Berkeley, California.
Below are 7 of Gregg’s points about the real St. Francis that contradict common misconceptions:
1) “Peace Prayer of Saint Francis can’t be traced further back than a French magazine published in 1912”
The so-called “Prayer of Saint Francis” (“Make me an instrument of your peace…”) is a great prayer, it’s just not from St. Francis!
2) “Believed that his followers should engage in manual labor to procure necessities. Begging always a secondary alternative”
Not quite how we always remember St. Francis.
3) “Articulated no legal or social reform program”
It’s not that legal or social reforms can’t be helpful or important; it’s just that we mustn’t think that’s what St. Francis stood for.
4) “Believed one’s most direct contact with God was in the Mass not in serving in the poor or in natural world”
As the Second Vatican Council said, the Eucharist is the “source and summit” of the Christian life!
5) “Believed the Mass required careful preparation, use of the finest sacred vessels, and proper vestments”
Since the Mass is the “source and summit” of the Christian life, we better do it right.
6) “Very orthodox on faith and morals: friars guilty of liturgical abuses or heresy should be remanded to higher church authorities”
St. Francis was not an anti-authoritarian “hippie.” Part of his radicalism was his radical commitment to the Church.
7) “Told Sultan al-Kamil he was there to explicate the truth of the Christian faith and save the sultan’s soul. Not an interfaith dialoguer”
It’s not that interfaith dialogue can’t be helpful, but that St. Francis practiced direct evangelism, which is also necessary.
St. Francis of Assisi, please pray for us!
Posted by Jovan-Marya Weismiller, T.O.Carm. at 22:33