I guess Francis' heresy doesn't go far enough for the German Bishops! Now, you won't even have to be Catholic to receive Holy Communion, just married to one. Let's remove a major reason for conversion, the desire to receive Communion with your spouse, shall we? 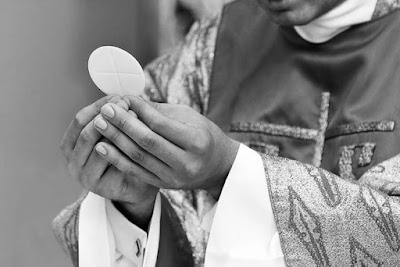 Munich, Germany, Feb 22, 2018 / 10:26 am (CNA/EWTN News).- Cardinal Reinhard Marx has announced that the German bishops' conference will publish a pastoral handout for married couples that allows Protestant spouses of Catholics "in individual cases" and "under certain conditions" to receive Holy Communion, provided they "affirm the Catholic faith in the Eucharist".
According to the press report of the Archbishop of Munich and Freising, the handout is primarily aimed at pastoral workers and is to be understood as a tool for pastoral situations, "to consider the concrete situation and come to a responsible decision about the possibility of the non-Catholic partner to receive Communion".
The announcement was made "after intensive debate" at the conclusion of the general assembly of the German bishops' conference, which was held Feb. 19 - 22 in the Bavarian city of Ingolstadt, and attended by 62 members of the bishops' conference under the leadership of conference chairman Cardinal Marx.
The press release declares that its premise is that "in individual cases, the spiritual hunger for receiving Communion together in interdenominational marriages can be so strong that it could jeopardise the marriage and the faith of the spouse". The statement goes on to say that this applies all the more to spouses who "already want to live out their marriage very consciously" as a Christian couple.
The central message of the handout is "that everyone in a marriage that binds denominations," after a "mature examination in a spiritual conversation with their priest or another person charged with pastoral care, that has come to a decision of conscience to affirm the Faith of the Catholic Church as well as thereby concluding a 'grave spiritual need' as well as fulfilling the desire to receive the Eucharist may approach the Lord's table and receive Communion."
Cardinal Marx' statement emphasises: "We are talking about decisions in individual cases that require a careful spiritual discernment."
The handout is expected to be published in a few weeks' time.
The Code of Canon Law states that in the danger of death or if “some other grave necessity urges it,” Catholic ministers licitly administer penance, Eucharist, and anointing of the sick to Protestants “who cannot approach a minister of their own community and who seek such on their own accord, provided that they manifest Catholic faith in respect to these sacraments and are properly disposed.”
The bishops' announcement follows a discussion of such a proposal at a previous general assembly held in the spring of 2017.
According to Archbishop Ludwig Schick of Bamberg in a report in the German diocesan newspaper "Tag des Herrn" from March 2017, Schick is quoted as saying that the bishops were seeking "a responsible decision" on the question of non-Catholic partners in interdenominational marriages in individual cases by pastoral means.

On Dec. 31 2016, the website of the Lutheran ecclesial community in Germany reported that Bishop Franz-Josef Bode of Osnabrück was hoping for a recognition of what was already the case, namely, that in many places, Protestants went to Communion with their Catholic spouses. "We have to give a foundation to what often already is in place in practice", the website quotes Bode from an interview with the Lutheran press agency EPD.