For those of us old enough to remember Warhol, Op-Art, The Factory, and Studio 54, it might come as a surprise that he was a devout Catholic. His parents were Rusyn immigrants and he was a member of the Ruthenian Rite, the Byzantine Catholic Church in the US. He regularly attended St Vincent Ferrer Church, a Roman Rite Church staffed by the Dominicans. He once said he was self-conscious about being seen in a Roman Rite church crossing himself 'in the Orthodox way'. He was more self-conscious than I am, obviously! When I was received, my Sponsor asked me if I was going to change the way I crossed myself. Almost 40 years later, I still cross myself in the Eastern manner.

He was almost a daily Mass goer, and whilst openly homosexual, strove to live a celibate life.

Below is an article from The Catholic Herald about him and an art show the Vatican is putting on.

From The Catholic Herald 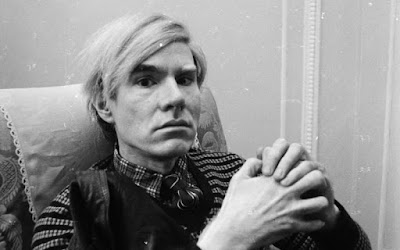 On April 1, 1987, the most popular artists, actors, fashion designers, writers and musicians in America converged on St Patrick’s Cathedral in New York. Liza Minnelli showed up, along with Calvin Klein, Tom Wolfe and George Plimpton. Yoko Ono arrived a bit early; she was giving a speech.

One could have easily mistaken Andy Warhol’s memorial service for a society event rather than a religious one, were it not for the eulogy given by the artist’s friend John Richardson. He spoke of Warhol’s “secret piety”, which “inevitably changes our perception of an artist who fooled the world into believing his only obsessions were money, fame and glamour, and that he was cool to the point of callousness. Never take Andy at face value.”

It is this secret piety that the Vatican Museums hope to uncover in their major exhibition of his work next year. Indeed, the Catholic faith is the only constant theme in his strange life.

Warhol’s parents were born in a village on the northern border of the Austro-Hungarian Empire. They were Ruthenians: members of a small Byzantine Catholic Church that grew out of Cyril and Methodius’s mission to the Carpathian Mountains. In 1909, his father moved to Pittsburgh, home of the largest Ruthenian community outside Europe. His mother followed in 1921, and their son Andrew was born seven years later. His father worked as a coal miner until he died when Warhol was 13.

In 1955, the shoe brand I. Miller hired Warhol to illustrate its advertisements in the New York Times. Critics compared the results to Toulouse-Lautrec’s posters. This drawing upon commercial themes in the pursuit of high culture came to define the Pop Art movement. It also placed Warhol at the centre of the New York avant garde, and his studio (nicknamed “the Factory”) became its headquarters.

The contrast with his working-class, immigrant Catholic boyhood could not be starker. All the hallmarks of the Sixties were there: drugs, sex, radical politics, more drugs. Several of the Warhol Superstars – minor artists whose work he promoted – overdosed or committed suicide in their twenties or thirties.

Religion kept Warhol from going over the brink. He attended Mass almost daily. Other days he would just slip into St Vincent Ferrer on Lexington Avenue, drop into the back pew and pray. He spent his Thanksgivings, Christmases and Easters volunteering at a soup kitchen, and befriended the homeless and poor whom he served. He put his nephew through seminary. Though openly gay, he endeavoured to remain celibate throughout his life. When he refused to support the gay rights movement, many of his friends blamed his faith.

He lived with his mother until she died, and every morning they would pray together in Old Slavonic before he left for the Factory. He always carried a rosary and a small missal in his pocket.

Warhol’s aloof façade forbade him from talking about his spiritual life in any depth with interviewers, but Natasha Fraser-Cavassoni, the last employee hired at the Factory, identified a conservative streak in his religion. “Being brought up Catholic gives a sense of hierarchical order, discipline and faith. Faith, when embraced, anchors the creative” – even for “unconventional traditionalists” like Warhol, she told Rolling Stone.

So how did Catholicism anchor the creativity of this “unconventional traditionalist”? Perhaps there are traces of it in his screen prints of Hollywood stars, which are widely hailed as “secular icons” in a society that venerates fame. The most popular of these is of Marilyn Monroe, declared a martyr by our cult of celebrity.

But the greatest insight is gained from the last year of Warhol’s life, when he became obsessed with Leonardo da Vinci’s The Last Supper. He produced hundreds of variations on this theme, many of them with colourful brand logos – Dove Soap, General Electric – stamped on top of a black-and-white stencil of the masterpiece. The ordinary overwhelms the extraordinary. The implication is that our appetites distract us from the vision of Christ.

Even more strikingly, Warhol draws on his faith while avoiding the two pitfalls of Pop Art: pompous sneering at all things “bourgeois” and outright blasphemy. He was reflecting on our society, not passing judgment on it. As Warhol himself said: “People are always calling me a mirror, and if a mirror looks into a mirror, what is there to see?”

The Vatican Museums have clearly decided that there is something to see. Sceptics will accuse the Vatican of cheap populism worthy of Warhol himself, but they may be unaware of the artist’s almost surreal devotion to the Church. At any rate, there can be no doubt that Warhol would have been overwhelmed by the honour.

His “icons” will come to rest above the catacombs of true saints and martyrs. He will be among – if not necessarily one of – the great artists of Christendom, whose work so powerfully reflected a God that remained just out of reach in his own.

As it happens, Warhol travelled to Rome in 1980 to meet John Paul II. It is said he wore his tamest wig and his plainest tie as a gesture of respect to the Holy Father. A photo shows him squeezing the Pope’s hand, squinting and smiling faintly, as though holding back tears. It is the only photo of Warhol that betrays his “secret piety”. For once, he looks like a person, not a symbol or a caricature. The Vatican Museums exhibition will be something of a homecoming.
Posted by Jovan-Marya Weismiller, T.O.Carm. at 22:52