I''m sure that most of my readers have heard of Liechtenstein. Some may have even visited it. I have a special, personal interest in it, because for a time, I was the sworn subject of its Prince. In my post, Fulfilment of a Promise, in which I explained how that came about, I said, 'I realised that there is only one State in the world, still existing, that was a constituent part of the Holy Roman Empire, and that is still ruled by a monarch, i.e. Liechtenstein. The story of how Liechtenstein, as Liechtenstein, became a State of the Empire is fascinating in itself, and is the subject of a future post.' Well, this is that future post! Before I get into the meat of my post, I wonder how many people are aware of the fact that Liechtenstein is the only State in modern Europe that took its name from the ruling family? Britain is ruled by the House Of Windsor, which until 1917, had been the House of Saxe-Coburg-Gotha. The House of Saxe-Coburg-Gotha rules in Belgium, too, but in 1920, because of anti-German sentiment after the Great War, it was changed to 'of Belgium'. The House also ruled in Portugal and Bulgaria until those monarchies were overthrown by the Reds. The House of Schleswig - Holstein -  Sonderburg - Glücksburg rules in Denmark and Norway, and did rule in Greece until overthrown. The House of Bernadotte rules in Sweden. So how did Liechtenstein end up with the House of Liechtenstein, with no change of name, as in Belgium?

First, some necessary background on the Imperial Diet (Parliament) of the Holy Roman Empire. The Diet was divided into three 'Colleges', the Electors who chose a new Emperor, the College of Princes, and the College of Imperial Cities. We can ignore the Colleges of Electors and Cities, because they have nothing 'immediate' (a pun, as you shall see!) to do with the subject at hand.

Membership in the College of Princes depended upon holding an 'immediate fief' (I warned you!). This meant that the fief was held directly from the Emperor, with no intermediate Lord. However, only the Princes had an individual vote. Lesser holders of immediate fiefs, such as Counts, were further grouped in Circles within the Colleges of Princes, and each Circle cast a vote in that College.

Now to Liechtenstein. By the late 17th century, the Liechtensteins were one of the wealthiest families in the Empire, with vast land holdings. They had originated in Lower Austria, where they held Castle Liechtenstein ('bright stone') in the 13th century, whence their name. Over the ensuing centuries, the House amassed broad estates mainly in Moravia, Silesia, Styria, and Lower Austria. However, all of their lands were held in fee from Lords other than the Emperor, often from Cadets of the Imperial House, to whom many of the Liechtensteins were close advisors. Karl I von Liechtenstein had been granted the title of Prince in 1608, but, since none of their great holdings was held immediately of the Emperor, they still did not qualify for an individual voice and vote in the Imperial Diet.

Finally, in 1699, the Head of the House, Hans-Adam I, purchased the Lordship of Schellenberg, and in 1712, the County of Vaduz. both of which were held immediately of the Emperor. However, despite the Head of the House holding the title of Prince, this still did not grant a seat in the Diet, since neither of these holdings was a Principality. Thus, their holding Schellenberg and Vaduz gave the House two additional votes in the Circle of Swabia, to influence that Circle's vote in the Diet, but not an individual vote in that body.

No Prince of Liechtenstein sat foot in the new country for many decades, continuing to live in Vienna near the Imperial Court. In the early 19th century, they built a hunting lodge in the Principality, and visited it regularly during shooting season. Then, in the aftermath of the Great War, Liechtenstein chose to break its customs union with the defeated Austria and entered into such a union with Switzerland. At about the same time, there was some unrest in the country because of their 'non-resident' Prince. They essentially told the Reigning Prince that unless he came to live among them, they would overthrow him and establish a republic. They had no particular dislike of either the Prince or of the monarchy, but they were tired of being ruled by a Prince who lived over 500 kilometres away. As a result, the Reigning Prince moved to Vaduz, whilst the rest of the extended Family remained in Vienna. In fact, Franz Josef II, the Prince to whom I swore allegiance, was the first Ruling Prince to live full time in the country, beginning in 1938.

Liechtenstein's last military engagement was in 1866, when Prince Johann II sent his 80 man army to support Austria and the Emperor. With no fatalities, 81 men returned, an Austrian officer having joined them! The army was abolished two years later, and during both the Great War and the 1939-1945 War the country was neutral.

Here's a videos discussing its neutrality in both the 1914-1918 War and the 1939-1945 War. The presenter discusses some other topics, as well, but he begins with Liechtenstein.


At any rate, that is a bit of the history of the fascinating country whose Prince was once my Liege Lord. 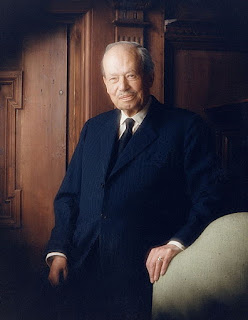 Franz Josef II., Fürst von und zu Liechtenstein,
to whom I owed allegiance. May he rest in peace.
Posted by Jovan-Marya Weismiller, T.O.Carm. at 18:59