There are many Eucharistic miracles recorded. Hosts that have turned to human flesh, and when subjected to scientific analysis were proven to be just that. You can read about a few of them here, 5 Extraordinary Eucharistic Miracles that Left Physical Evidence (With Pictures!). However, that is not the point of this post.

There has been a recent event that whilst not as spectacular as the ones in the ChurchPop article, still ranks as a Eucharistic miracle. Here is an article about it, from 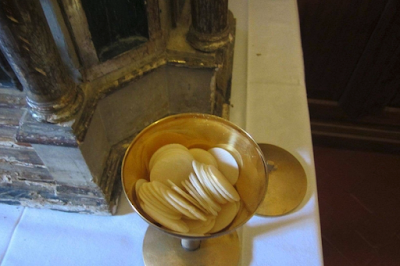 Italian priest who helped make the discovery says it is reminiscent of the Eucharistic miracle of Siena in 1730.
Edward Pentin
Forty ‘miraculously’ preserved, consecrated hosts have been discovered in a church that was destroyed by a large earthquake in central Italy in 2016.
The hosts, recovered from a tabernacle recently retrieved from the ruins of the parish church of Arquata del Tronto, have no bacteria or mold, as usually happens to hosts after a few weeks, according to the Italian bishops’ newspaper Avvenire.
The tabernacle, which since the earthquake had been kept in storage along with other artifacts and was recently returned to the diocese, contained an upturned but unopened ciborium.
Inside the ciborium were 40 hosts whose color, shape and scent were unchanged. Even though the quake took place nearly a year and a half ago, the hosts “seemed to have been made yesterday,” Avvenire reported Feb. 21.
The local bishop, Mons. Giovanni D'Ercole of Ascoli Piceno, was cautious, saying “faith requires prudence,” but added that such a discovery needs “no words.”
“It is a sign of hope for everyone,” he added. “Confronted with a fact like this, one has to surely remain silent. It simply touches and strengthens faith in Jesus who remains alive to console the earthquake-stricken population of Arquata.”
The 6.6 magnitude earthquake that hit the region on Oct. 30 caused immense damage to Arquata del Tronto and the surrounding area. The basilica in Norcia, the native town of St. Benedict and home to the famous Benedictine Monks of Norcia, was almost totally destroyed. It followed a similarly powerful quake in the region on Aug. 24 of that year which killed almost 300 people.
Don Angelo Ciancotti, a priest in nearby Ascoli who helped make the discovery, said finding the hosts was “a great joy” and gives a “message for the whole community.”
“Yes, for me it is a miracle,” he told the Italian daily Il Resto del Carlino. “Obviously, those who have no faith aren’t able to believe in anything, but never has there been any tampering. The Lord has done this all by Himself.”
Don Ciancotti, who has close family ties to Arquata, knew every missing person in the rubble and all the streets in the region. So together with some residents he sought to recover all the artifacts that could be saved.
He carried out some research to see where objects had been recovered, including those originating from the church — Santa Maria Assunta in Arquata. Later, he learned that the church’s treasures had been stored in a warehouse, so he retrieved them, cleaned them up, and put them in the sacristy of the cathedral in Ascoli.
Seeing that the tabernacle was locked, he remembered he had another key for a draw in his office. “I said, ‘let's try’, and it opened on the first attempt,” he said. But the biggest surprise was to come: ”The ciborium was horizontal, but it hadn’t opened, and inside it the hosts were perfectly intact,” he said.
He said the wafers had been prepared by nuns at the convent of Sant'Onofrio. “I immediately asked them if they used preservatives and they told me: ‘No, just flour and water.’"
Don Ciancotti was the first to be sceptical. “I’m a cousin of [doubting] St. Thomas,” he joked, “and so I had several others witness to it.”
He said he believes the discovery is reminiscent of the Eucharistic miracle of Siena in 1730 when a ciborium with consecrated hosts was stolen but the exact number of hosts miraculously re-appeared in the offering box attached to a prie dieu.
The hosts, which were not consumed, did not deteriorate but remained fresh and even retained a pleasant scent.
Posted by Jovan-Marya Weismiller, T.O.Carm. at 00:57