How I Became a Member of Clan MacGregor

Some 50+ years ago, I was a young romantic, much taken with the history and Clans of Scotland. I discovered that my Great Grandmother was a Campbell, but as an 'unreconstructed Jacobite', as I was at the time, (I have long since left that behind and taken the Oath of Allegiance to Her Majesty the Queen). I was horrified! Whilst I wanted to belong to a Clan, I wanted nothing to do with the Campbells.

In my research, I discovered the old 'broken man' concept of Scots Law, in which a man of no Clan could petition a Chief for membership, a concept still valid, as shown by The Lord Lyon's webpage, Who is a member of a clan?,

I did some research and I wrote three Chiefs whose Clans had been 'Out' in '15 and '45. Each letter read something like, 'You may think this silly, but I should like to be a member of your Clan.' I received no answer from two of them. However, the third, Sir Gregor MacGregor of MacGregor, Chief of Clan Gregor, not only answered, but he said, 'Not only do I not think it silly, I am honoured you would want to be a MacGregor', accepted my allegiance and granted me membership.

I wrote him several times, addressed to his Estate in Scotland. It was quite exciting. I would wait weeks for an answer, with no idea where it might come from! He was on active service, and I seem to recall Athens, Hong Kong and one or two other 'exotic' places from which his answers were posted.

Three or four years ago, I wrote to our current Chief, Sir Malcolm, and told him this story he replied, saying, 'An interesting story in respect of my father and one that is probably not too uncommon'.

Over the years, as I've studied my Clan, I've discovered a rich and varied history. I discovered that Clan Gregor is a branch of Siol Alpin, the Seed of Alpin, along with six other clans, all descended from King Cináed mac Ailpín, son of Alpin. Our Motto, 'S Rioghal Mo Dhream, translates as 'Royal is My Race'. Our plant badge, worn on the bonnet as identification during battle is the Scots Pine, which all seven clans of Siol Alpin share. 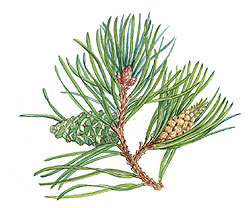 We have five official tartans approved by our Chief, the four illustrated here, and a green and white pattern, based on the MacGregor Red, which is worn only by Scottish dancers of the Clan. 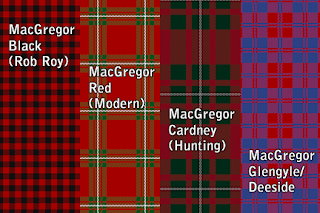 And here is an article, written by the Chief, entitle 'Our Tartans', giving a bit of their history.

Our Cap Badge, which I wear, is the Crest of the Chief's Coat of Arms, a lion's head erased Proper, crowned with an antique crown Or, encircled by a strap and buckle bearing the Clan Motto, indicating my status a a non-armigerous clansman. 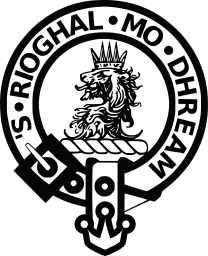 At any rate, as I told the Chief when I wrote him, '50 years on. I am still proud to be a MacGregor. I wear your crest, properly, in a strap and buckle. and am, after all these years, still studying and learning more about MacGregor history'.
Posted by Jovan-Marya Weismiller, T.O.Carm. at 22:59