Saint Gabriel of Our Lady of Sorrows

Since In Lumine Fidei only posted the link to Wikipedia about St Gabriel, here's a bit more information from a Catholic source. 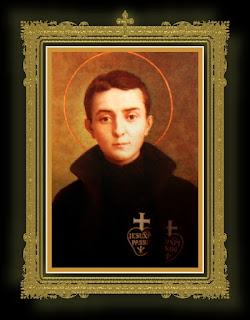 One of thirteen children. After a youth devoted to the world and society, attending the theatre, chasing women and the hunt, he was led to the Passionist Order by Our Lady, making his profession on 22 September 1857. His life was not marked by great events or controversy, but given to prayer, sacrifice, and a devotion to Our Lady and the contemplation of her sorrows over the suffering of Jesus. Many miracles are attributed to him after his death. Cured Saint Gemma Galgani when she prayed for his intervention. Pope Benedict XV gave him as a pattern for young people.