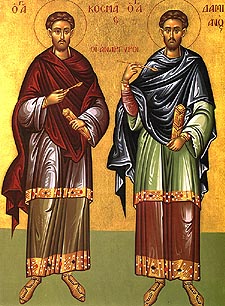 The Holy Martyrs, Wonderworkers and Unmercenary Physicians Cosmas and Damian were born in Rome, brothers by birth, and physicians by profession. They suffered in Rome during the reign of the emperor Carinus (283-284). Brought up by their parents in the rules of piety, they led strict and chaste lives, and they were granted by God the gift of healing the sick. By their generosity and exceptional kindness to all, the brothers converted many to Christ. The brothers told the sick, “It is not by our own power that we treat you, but by the power of Christ, the true God. Believe in Him and be healed.” Since they accepted no payment for their treatment of the infirm, the holy brothers were called “unmercenary physicians.”

Their life of active service and their great spiritual influence on the people around them led many into the Church, attracting the attention of the Roman authorities. Soldiers were sent after the brothers. Hearing about this, local Christians convinced Saints Cosmas and Damian to hide for a while until they could help them escape. Unable to find the brothers, the soldiers arrested instead other Christians of the area where the saints lived. Saints Cosmas and Damian then came out of hiding and surrendered to the soldiers, asking them to release those who had been arrested because of them.

At Rome, the saints were imprisoned and put on trial. Before the Roman emperor and the judge, they openly professed their faith in Christ God, Who had come into the world to save mankind and redeem the world from sin, and they resolutely refused to offer sacrifice to the pagan gods. They said, “We have done evil to no one, we are not involved with the magic or sorcery of which you accuse us. We treat the infirm by the power of our Lord and Savior Jesus Christ and we take no payment for rendering aid to the sick because our Lord commanded His disciples, ‘Freely have you received, freely give’ (Mt. 10: 8).”

The emperor, however, continued with his demands. Through the prayer of the holy brothers, imbued with the power of grace, God suddenly struck Carinus blind, so that he too might experience the almighty power of the Lord, Who does not forgive blasphemy against the Holy Spirit (Mt. 12:31). The people, beholding the miracle, cried out, “Great is the Christian God! There is no other God but Him!” Many of those who believed besought the holy brothers to heal the emperor, and he himself implored the saints, promising to convert to the true God, Christ the Savior, so the saints healed him. After this, Saints Cosmas and Damian were honourably set free, and once again they set about treating the sick.

But what the hatred of the pagans and the ferocity of the Roman authorities could not do, was accomplished by black envy, one of the strongest passions of sinful human nature. An older physician, an instructor, under whom the holy brothers had studied the art of medicine, became envious of their fame. Driven to madness by malice, and overcome by passionate envy, he summoned the two brothers, formerly his most beloved students, proposing that they should all go together in order to gather various medicinal herbs. Going far into the mountains, he murdered them and threw their bodies into a river.

Thus these holy brothers, the Unmercenary Physicians Cosmas and Damian, ended their earthly journey as martyrs. Although they had devoted their lives to the Christian service of their neighbours, and had escaped the Roman sword and prison, they were treacherously murdered by their teacher.

The Lord glorifies those who are pleasing to God. Now, through the prayers of the holy martyrs Cosmas and Damian, God grants healing to all who with faith have recourse to their heavenly intercession.

Holy unmercenaries and wonderworkers, Cosmas and Damian, visit our / infirmities. / Freely you have received; freely give to us.
Kontakion — Tone 2

Having received the grace of healing, / you grant healing to those in need. / Glorious wonder-workers and physicians, Cosmas and Damian, / visit us and put down the insolence of our enemies, / and bring healing to the world through your miracles.
Posted by Jovan-Marya Weismiller, T.O.Carm. at 00:06