The ultimate aim of Freemasonry since its founding has been the destruction of our Græco-Roman Catholic Civilisation as typified by 'Throne and Altar'! 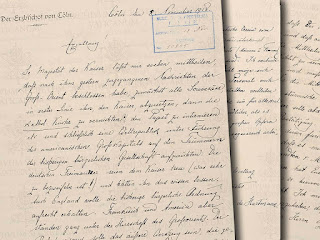 Image: Scans of the original 3-page letter from the secret Vatican Archives. We do not have authorization to publish the full contents of the letter, but the author of this report was given permission to review it in its entirety.

Dr. Michael Hesemann, a German historian of the Catholic Church, has just given an interview to Robert Moynihan’s Inside the Vatican Magazine. In this interview, which deals with the 100th Anniversary of the apparitions of Fatima, Dr. Hesemann makes the following statement:

Also in 1917, Freemasonry celebrated the 200th anniversary of the foundation of the first Grand Lodge in London in 1717. The Masonic ideology is not only based on deism, but also on the Gnostic heresy of self-salvation and “enlightenment,” and has a decidedly anti-Catholic agenda. Just in 1917, Maximilian Kolbe, one of the greatest saints of the 20th century, witnessed a Masonic procession in Rome, carrying banners with the slogan “Satan must reign in the Vatican. The Pope will be His slave.”

One year later, the German Emperor Wilhelm II was warned by German Freemasons that the Grand Orient planned to force all sovereign monarchs in Europe to abdicate – which indeed happened in 1918 – [also] to destroy the Catholic Church and to bring Europe under the control of American Big Business, according to a document I found in the Vatican Secret Archives.

Bolshevism would be the instrument of Freemasonry to reach this goal.

Indeed, 1917 was the year of the Russian [Bolshevik] revolution which ended in a massive persecution of the Church.

Also 1917 was the year of the United States’ entry into World War I, the year when the two superpowers were born, which formed the history of the 20th century for the next 74 years. [emphasis added]

Dr. Hesemann personally rejects the view that Russia has not been sufficiently consecrated to the Immaculate Heart of Mary, and denies that there is still a part of the Third Secret of Fatima missing. Nevertheless, he thinks that the message of Fatima is still with us and that some form of grave chastisement is still imminent. And this chastening might, in my view, be connected to the words quoted above: namely, the destruction of many of the European monarchies, together with the weakening and undermining of the Catholic Church. Many historic nations may also be thereby destroyed (as Our Lady implied).

Inspired by his statement that he had himself unexpectedly found an important document in the Secret Vatican Archives, I contacted Dr. Hesemann personally, and he was immediately generous and offered to share with me that original document. He has conducted extensive research at the Secret Vatican Archives since 2009. In March of 2017 and in his own preparation for the 100th Anniversary of Our Lady of Fatima, Dr. Hesemann actually published an article about this historic document in which he himself quotes the most important parts of that document.

The document which Dr. Hesemann found in the Vatican Archives files of the Apostolic Nunciature of Munich is a handwritten letter written on 8 November 1918 by the Archbishop of Cologne, Cardinal Felix von Hartmann, and addressed to the Apostolic Nuncio in Germany, Archbishop Eugenio Pacelli — who would later become Pope Pius XII. In that letter, Cardinal von Hartmann informed Archbishop Pacelli about some information that Emperor Wilhelm II just had received and which he wanted to pass on to the pope, with the help of his personal friend Cardinal von Hartmann. What follows are the most important excerpts of that historic letter:

His Majesty the Emperor just has let it be known to me “that, according to news that came to him yesterday, the Grand Orient has just decided first to depose all Sovereigns – first of all him, the Emperor – then to destroy (?) the Cathol.[olic] Church, to imprison the pope, etc and, finally, to establish on the ruins of the former bourgeois society a world republic under the leadership of  American Big Capital. The German Freemasons are purportedly loyal to the [German] Emperor (which is to be doubted!) and they informed him about it. Also England wants to preserve the current bourgeois order. France and America, however, are said to be under the full influence of the Grand Orient [Freemasonic Lodge]. Bolshevism is said to be the external tool to establish the desired conditions. In the face of such a great danger which threatens in addition to the Monarchy, also the Catholic Church; it is thus important that the German episcopacy be informed and that also the pope be warned.” So far the message of His Majesty. I have believed myself to be duty-bound to pass it on to Your Excellency, and I have to leave it up to Your judgment whether You wish to pass this message on to Rome. The stormy demand of the [German] Social Democrats that the Emperor should abdicate gives a certain confirmation to this message. May God protect us and His Holy Church in this terrible turmoil! [….] With utmost devotion and being at His Excellency’s disposal,  Cardinal Felix de [von] Hartmann.

As Dr. Hesemann himself points out in a manuscript (written in May of 2016) which he kindly shared with me, it was only one day later that the November Revolution broke out in Germany with the consequence that the German Emperor Wilhelm II had to abdicate. The warning had come true.

Dr. Hesemann – who has authored more than 40 books and who has gained much recognition for his important research about the Armenian Genocide – concludes his report on this historic letter with the following words:

How far away we are today, 98 [now 99] years later, from such an announced [and recommended] “world republic under the leadership of American big capital,” each of us may judge for himself. The “Transatlantic Trade and Investment Partnership” TTIP would have brought the world certainly an immense step closer to that goal.

In this respect, the document from the year 1918 seems nearly prophetic. However, it does not describe the visions of a seer, but, rather, quotes a purported plan. Was such a plan of the Freemasonic Grand Orient also the blueprint for the European history of the 20th and early 21th century? That would certainly be a simplification, just like any conspiracy theory. However, one cannot deny that Freemasonry planned, nearly one hundred years ago, what afterwards has come true, and in an almost uncanny way. [emphasis added]