Today is the Feast of the Holy Apostles and Deacons Prochor, Nicanor, Timon and Parmenas.
✠✠✠✠✠ 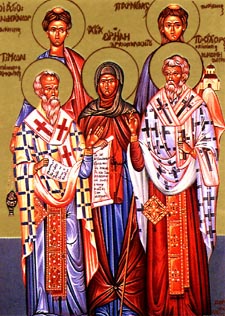 Saints Prochorus, Nicanor, Timon and Parmenas, Apostles of the Seventy were among the first deacons in the Church of Christ.

In the Acts of the Holy Apostles (6:1-6), it is said that the twelve Apostles chose seven men: Stephen, Philip, Prochorus, Nicanor, Timon, Parmenas and Nicholas, full of the Holy Ghost and wisdom, and appointed them to serve as deacons.

They are commemorated together on July 28, although they died at various times and in various places.

At first, Saint Prochorus accompanied the holy Apostle Peter, who made him bishop in the city of Nicomedia. After the Dormition of the Most Holy Theotokos, Prochorus was a companion and coworker of the holy Apostle John the Theologian and was banished with him to the island of Patmos. There he wrote down the Book of Revelation concerning the final fate of the world. Upon returning to Nicomedia, Saint Prochorus converted pagans to Christ in the city of Antioch, where he suffered martyrdom.

Although Saint Nicanor suffered on the same day that the holy Protomartyr Stephen (December 27) and many other Christians were killed by stoning, he is also commemorated on December 28.

Saint Timon was later appointed by the Apostles as bishop of the city of Bostra in Arabia and suffered from the Jews and pagans for preaching the Gospel. He was thrown into a furnace, but by the power of God he came out of it unharmed. The tradition of the Roman Church says that Saint Timon died by crucifixion. Saint Timon is also commemorated on December 30.

Saint Parmenas zealously preached Christ in Macedonia. He died after being afflicted with an illness. Some say that Saint Parmenas suffered martyrdom under Trajan (98-117) in the final year of his reign.
Troparion — Tone 3

You were holy deacons and eye-witnesses of the Word, / and chosen vessel of the faith, / O glorious Nicanor, Prochorus, Parmenas and Timon. / Therefore today we celebrate your sacred memory, / blessing you in gladness of heart.
Posted by Jovan-Marya Weismiller, T.O.Carm. at 00:06