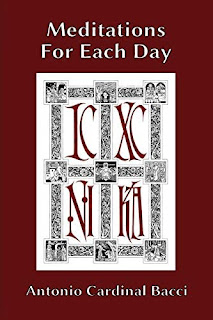 1. When a man fears and loves God, temptation is the greatest trial which he can endure.

“No one is so perfect and holy,” says the Imitation of Christ, "as not sometimes to have temptations; and we never can be wholly free from them. Nevertheless, temptations are often very profitable to a man, troublesome and grievous though they may be; for in them a man is humbled, purified and instructed. All the Saints passed through many tribulations and temptations, and profited by them. And they that could not support temptations became reprobate, and fell away ...

“A man is never wholly secure from temptation as long as he liveth; for there is within us the source of temptation, since we were born in concupiscence ...

“Inconstancy of mind, and little confidence in God, is the beginning of all evil temptations. For as a ship without a helm is driven to and fro by the waves, so the man who is negligent, and giveth up his resolution, is tempted in various ways. Fire trieth iron, and temptation a just man.” (Imitation of Christ, Bk I, c. 13)

These words from “The Imitation of Christ” should encourage us. God sends us temptations in order to test our virtue and to make us understand that we are in continual need of Him. The important thing is to overcome them with the help of His grace, for a thousand temptations do not constitute a single sin. When we are prepared to make sacrifices and to rely upon God's assistance, temptations can be a source of merit for us.

“Blessed is the man who endures temptations,” writes St. James, “for when he has been tried, he will receive the crown of life which God has promised to those who love Him.” (James 1:12)

We should not fear temptations nor be discouraged by them. Instead, we should watch and pray, and love God.

2. “Still we must watch,” The Imitation of Christ continues, “especially in the beginning of temptation, for then the enemy is more easily overcome, if he be not suffered to enter the door of the mind, but is withstood upon the threshold the very moment that he knocketh. Whence a certain one hath said: ‘Resist beginning; all too late the cure, when ills have gathered strength by long delay.’ (Ovid. Remed. Amor., 5:91) For first there cometh into the mind a simple thought; then a strong imagination; afterwards delight, and the evil motion and consent.” (Imitation of Christ, Bk. 1, c. 13)

It is worth meditating on this vivid description of the psychology of temptation and of the simplest remedy by which it can be combated. Every temptation is first presented to the mind as a simple thought. If a man is determined enough it is quite easy to reject it immediately. If there is any delay, however, the concept is clothed by the imagination and projected in vivid colours until it arouses the evil inclinations of the senses. In this way the idea takes possession of the mind, so that it is almost impossible to set it free.

We must be ready to face up to such an idea before it takes possession of us. We should treat it as we would a serpent, not pausing to examine it, but taking to flight at once. If we are resolute, the grace of God will ensure our safety.

3. Why does God allow us to endure temptations? According to spiritual writers, there are two main reasons.

(1) Because God wishes us to be humble and not to depend too much on ourselves. Before he was tempted, St. Peter boasted that he would never deny his Master. When he was tempted, he fell, and recognised his weakness.
(2) Because by resisting temptation we can show our love for Jesus and our readiness to sacrifice everything for Him.

Temptations, therefore, can teach us humility and can help us to store up merit for our souls.
Posted by Jovan-Marya Weismiller, T.O.Carm. at 00:07