And, on the occasion of Fr Hopkins' 178th birthday, here is a review of a recent biography of him, courtesy of Fr Dwight Longenecker. 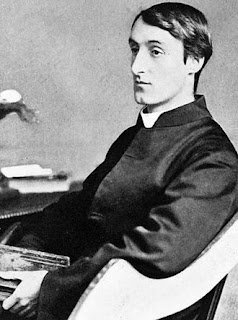 There can be no better biographer of a poet than a poet. Paul Mariani’s life of Gerard Manley Hopkins is a triumph of scholarship, sensitivity, and heart-felt understanding.

Dr. Mariani is not only a poet but also a professor at Boston College. He has written lives of William Carlos Williams, Wallace Stevens, Robert Lowell, and John Berryman. His work extends to commentaries on Hopkins’ poetry, books on poetry and the imagination, the spiritual works of St. Ignatius, and at least four books of Dr. Mariani’s own poetry.

Gerard Manley Hopkins was born in 1844 into an artistic and well-to-do English family. Brought up as an Anglican, he disappointed his parents by converting to Catholicism while at Oxford under the sway of Bl. John Henry Newman. He disappointed them further by deciding not just to become a Catholic priest, but a Jesuit.

Highly sensitive and not a little eccentric, from a worldly point of view, Hopkins was an exquisite failure. Moved from post to post, the scholarly and otherworldly poet was driven hard by the demands of Jesuit spirituality and the unrelenting hard work and discipline of the austere Jesuit life. Dying at the just forty-four years of age from typhoid resulting from fetid drains in a dilapidated seminary in Dublin, his radical poetry was rarely read and never understood in his own lifetime.

Dr. Mariani tracks the poet’s life through his poetry, letters, spiritual reflections, and sermons. Echoing Hopkins’ style with wordplay, alliteration, surprising cadences, puns, and rhymes, Dr. Mariani manages to take the reader not only into the mind of the unpredictable poet, but into his heart. He sees what Hopkins saw and shares the vision. The biographer does not wear his Catholic faith on his sleeve, but it is clear that he also understands both Hopkins’ spiritual and poetic passions.

One of the elements of Hopkins’ life which is lost on those who only read his poetry and have a glancing glimpse of his life, is the level of his scholarship. By delving deeply into the poet’s intellectual formation, Dr. Mariani shares with our benighted selves the enlightened intellectual life of an Oxford undergraduate in the mid-nineteenth century.

The level of accomplishment that was expected is astounding. The young Hopkins not only had a sure grounding in Latin and Greek, but he had a good knowledge of Italian and French and was eager to learn Welsh. He was widely read in the classical poets, philosophers, and historians. Furthermore, he was keenly and minutely observant of nature—knowing all the flora and fauna and keeping detailed minutes of his moments with the created world.

As he trained as a Jesuit, Hopkins added to his already wide learning even more depth of theology, Biblical studies, philosophy, ethics, and aesthetics. Dr. Mariani shows how the brilliant young student harmonized his studies and drew everything into the synthesis of his poetry. It might be too easy to read Hopkins’ gushing nature poetry and write him off as a sentimental post-Wordsworthian romantic. His in-depth study of nature itself and his reality-based Scotist philosophy manifested in a poetry that penetrates to the heart of beauty and unlocks that gash, that gush, that glimpse of glory for the mortal reader.

Without belaboring the point, Dr. Mariani, through his brilliant biography, manages to unlock the spirit of Hopkins. Hopkins speculated that the “inscape” was the inner reality of a particular created being, while the “instress” was the viewer’s apprehension of that reality through the aesthetic experience. If so, then Dr. Mariani assists us to instress the inscape of Hopkins himself.

While Dr. Mariani’s book unlocks the mind and heart of Hopkins, it also takes us on the tragic journey to the poet’s end. Hopkins springing songs uplift and unlock the potency of nature, but they also surge with a sadness and melt with melancholy. As he lurches from one failed parochial post to a strenuous teaching job and from serving as a temporary priest in an industrial town to finally a lectureship at a miserable attempt of a Catholic university in Dublin, Dr. Mariani traces the tragedy of Hopkins’ life.

When he became a Catholic, he lost the few friends he had and never quite fit in. The poet Robert Bridges remained steadfast, but even he did not understand Hopkins’ poetry. It was one of history’s ironies that although Bridges, in his old age was appointed Poet Laureate, it was, at the end, the manuscripts of his friend Hopkins’ that the literati came to see.

It must be admitted that Dr. Mariani’s book, while brilliant, was also a dense and sometimes difficult read. He plods through the diaries, letters, sermons, and reflections of Hopkins, and to follow every page requires stamina. But even this fault can be forgiven, for nothing about Hopkins comes easily. His poetry too, while breezy and bright, contains wild words and strange surprises. Hopkins was a dense, complex, and unexpected personality. He was not easy to read and neither is his biography.

Finally, it is in the dark days of depression at the end that Hopkins’ poetry connects with so many. Who in the darkest moments of loneliness has not heard his howl, “I wake and feel the fell of dark, not day.” Hopkins gives words to all those who have fretted in frustration: “what I plead is just. Why do sinners’ ways prosper? and why must Disappointment all I endeavour end?, and who has not called out in the dryness of despair, ‘Mine, O thou lord of life, send my roots rain!’”

Paul Mariani draws the threads together sympathetically, so the poet’s lonely death—away from family and friends in a bleak room in Dublin—has all the pathos and poignancy of a great romantic poet’s death—with this one exception: Hopkins had a stubborn, sure and certain faith, and that faith melded with humility revealing him to be “This Jack, joke, poor potsherd, patch, matchwood, immortal diamond…immortal diamond.”

The featured image is a photograph of Gerard Manley Hopkins and is in the public domain, courtesy of Wikimedia Commons.