Today is the Fore-feast of the Procession of the Precious and Life-Giving Cross of the Lord and the Feast of the Holy and Just Eudocimus.
✠✠✠✠✠ 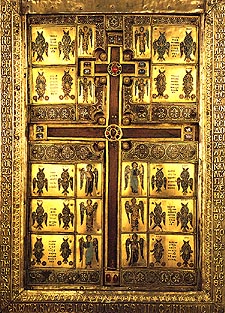 The origin of this Feast is explained in the Greek Horologion of 1897: “Because of the illnesses which occur during the month of August, it was customary at Constantinople to carry the Precious Wood of the Cross in procession throughout the city for its sanctification, and to deliver it from sickness.”

On the eve (July 31), the Cross was removed from the imperial treasury and placed it upon the Holy Table of the Great Church of Hagia Sophia (which is dedicated to Christ, the Wisdom of God). From August 1 until the Dormition of the Most Holy Theotokos, there was a procession throughout the entire City, and then the Cross was placed where all the people could venerate it.

In the Russian Church, this Feast is combined with the remembrance of the Baptism of Rus' on August 1, 988.

Knowledge of the day of the actual Baptism of Rus' is preserved in the Chronicles of the XVI century: “The Baptism of the Great Prince Volodymyr of Kyiv and of all Rus' took place on August 1.”

In the current practice of the Russian Church, the service of the Lesser Sanctification of Water on August 1 takes place either before or after Liturgy. Because of the Blessing of Water, this first Feast of the Savior in August is sometimes called “the Savior of the Water.” Along with the Blessing of Water, there may also be a Blessing of Honey (thus it is also called “the Savior of the Honey),” because, on this day, the newly-gathered honey is blessed and tasted.
Troparion — Tone 1

O Lord, save Your people, / and bless Your inheritance! / Grant victories to Right-Believing Christians / over their adversaries. / And by virtue of the Cross, / preserve Your habitation!
Kontakion — Tone 4

As You were voluntarily crucified for our sake, / grant mercy to those who are called by Your name; / make all Catholic Christians glad by Your power, / granting them victories over their adversaries, / by bestowing on them the invincible trophy, Your weapon of peace!
✠✠✠✠✠ 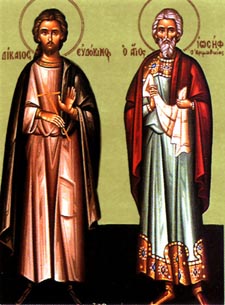 Saint Eudocimus, a native of Cappadocia (Asia Minor), lived during the ninth century during the reign of Emperor Theophilus (829-842). He was the son of the pious Christians Basil and Eudokia, an illustrious family known to the emperor. They raised their son “in discipline and admonition of the Lord” (Eph. 6: 4), planting in his soul a sincere faith and holy virtues.

The righteous life of Saint Eudocimus was devoted to pleasing God and serving his neighbour. Having given a vow to remain unmarried and chaste, he avoided conversation with women and did not look at them. He would speak only with his own mother, whom he greatly respected. The emperor valued his virtue and talents, so he appointed Saint Eudocimus as governor of Chorziane, Armenia. Fulfilling his duty as a servant of God, Saint Eudocimus governed the people justly and with kindness. He concerned himself with the unfortunate, and with orphans and widows, and he was a defender of the common people. His personal Christian exploits which he did in secret, were known only to God.

Eudocimus pleased God by his blameless life, and the Lord called him at age 33. Lying on his deathbed, Saint Eudocimus gave final instructions to place him in the grave in those clothes in which he would meet death. Then he sent everyone out of the room and entreated the Lord that no one would see his end, just as no one saw his secret efforts during life. His attendants buried him as he had instructed them. Right after the death of Saint Eudocimus miracles took place at his grave. Many sick people were healed, and the news of the miraculous healings spread.

After 18 months, the mother of Saint Eudocimus came from Constantinople to venerate his relics. She gave orders to remove the stone, dig up the ground, and open the grave. Everyone beheld the face of the saint, bright as if alive, altogether untouched by decay. A great fragrance came from him. They took up the coffin with the relics from the earth, and they dressed the saint in new clothes. His mother wanted to take the relics of her son to Constantinople, but the Kharsian people would not clear a path for their holy one. After a certain time the hieromonk Joseph, having lived and served at the grave of the saint, transported the relics of Saint Eudocimus to Constantinople. There they were placed in a silver reliquary in the church of the Most Holy Theotokos, built by the parents of the saint.

Saint Eudocimus is considered by the Russian Church to be one of the special protectors and intercessors before God of the family hearth. He was, as his name implies, truly successful in every virtue.
Troparion — Tone 4

He who called you from earth to heaven, / keeps your body unharmed after death, holy Eudocimus; / for you lived a sober and holy life / and did not defile your flesh; / so with boldness intercede with Christ that we may be saved.
Kontakion — Tone 3

Today your honoured memory has assembled us at the holy shrine of your sacred relics; / all then who approach and venerate them / are rescued from the evil malice of demons / and are swiftly delivered from various diseases, blessed Eudocimus.
Posted by Jovan-Marya Weismiller, T.O.Carm. at 00:06