A Sad Day in History 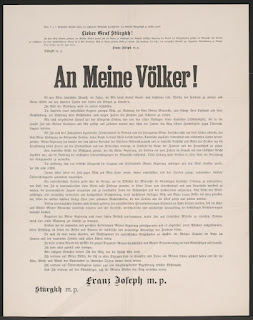 On this day, 108 years ago, at 11AM in Bad Ischl, Emperor Franz Joseph signed the proclamation 'An meine Völker!', declaring war on the Kingdom of Serbia and beginning the First World War. Later that day ships of the Imperial Navy sailed down the Danube and bombarded Belgrade.

The following day, 29th July, Russia declared war on Austria, in support of Serbia. Germany, following an ultimatum demanding the Russians stand down, declared war against Russia on 1st August, and against Russia's ally, France, on 3rd August. The day previous, the German army occupied Luxembourg. On the 4th of August, when Germany declared war on neutral Belgium which had refused Germany access to the French frontier, Britain declared war against Germany.
After more than four years of war - which saw the demise of four empires, the Austrian, the Russian, the German, and the Ottoman; the rise of Bolshevism in the east and the murder of the Russian Imperial Family- there were left more than ten million dead on either side.
Franz Joseph did not live to see the dissolution of his ancestral empire in 1918, dying on 21 November 2016.
Posted by Jovan-Marya Weismiller, T.O.Carm. at 08:00