A look at a member of my least favourite European royal house, tho' they're in a tight race with the House of Orleans. 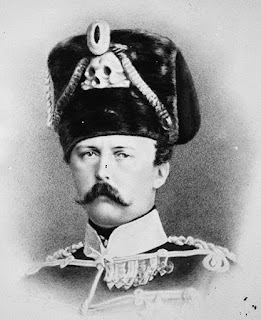 A major military figure in the conflicts which brought about the unification of Germany was the Prussian Prince Friedrich Karl, the nephew of Kaiser Wilhelm I and grandson of Prussian King Friedrich Wilhelm III. He was born on March 20, 1828 in Berlin, the son of Prince Karl of Prussia and Princess Marie von Saxe-Weimar-Eisenach. His father was the younger son of King Friedrich Wilhelm III and the formidable Queen Luise von Mecklenburg-Strelitz. As his father had served as a general in the Prussian army, it was not surprising that Prince Friedrich Karl was groomed from early in life for a military career. It was his good fortune that his life coincided with the appearance of some of the most brilliant military minds in the illustrious martial history of Prussia. From 1842 to 1846, for example, his tutor was Major Albrecht Graf von Roon who would later rise to the position of Minister of War and become one of the preeminent military figures responsible for the unification of Germany under Prussian leadership. Once his term as tutor was up, the count followed Prince Friedrich Karl to the University of Bonn in 1846 as his military escort. He joined the “Corps Borussia Bonn” fraternity, which would include numerous Prussian royals as members, and in 1847 was decorated for saving the life of a child from drowning in the Rhine River. Prince Friedrich Karl finished school in 1848 and served with the rank of captain in the Schleswig-Holstein war under General Friedrich Graf von Wrangel and he distinguished himself for his skill and dauntless courage under fire. The following year he served on the General Staff, with a promotion to major, during the campaign in Baden and was badly wounded leading the Prussian hussars in a bold charge at the battle of Wiesenthal. He recovered and earned further promotion in the peacetime army, rising to colonel in 1852, major general in 1854 and lieutenant general in 1856 as he devoted himself to studying military theory and shared his ideas with a select circle of Prussian army officers through a series of lectures and essays and in 1860 this group published a book on their proposed military reforms based largely on the ideas out forward by Prince Friedrich Karl. That same year he was posted to command the Prussian III Army Corps and the Prince was able to use this position to showcase his ideas and put them into practice.

In 1864, when Prussia went to war with Denmark, Prince Friedrich Karl (promoted to General of Cavalry) and commanded the Prussian contingent of the joint Austrian-Prussian expeditionary force. There was though some friction as the Prince clashed with chief of staff General Leonhard von Blumenthal who would be credited with winning the war and become a field marshal. Prince Friedrich Karl suffered some setbacks but himself went on to win some key victories in the Jutland campaign as commander of the allied forces after the resignation of General Wrangel. Prussian King Wilhlem I rewarded him for his exceptional service during the conflict and he cemented his status as one of the leading military figures in Prussia. In 1866 the Prince was appointed to the prestigious command of the First Army which he led in the war against Austria. Taking the field against the Austrians and Saxons in Bohemia, Prince Friedrich Karl greatly distinguished himself throughout the short conflict, particularly at the decisive battle of Koniggratz in which he and his outnumbered troops held their ground against determined Austrian attacks until Crown Prince Friedrich and his forces arrived to save the day and claim the final victory, ensuring an Austrian defeat. 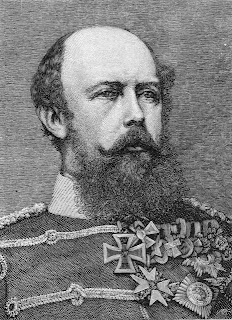 The next major test came with the Franco-Prussian War in which Prince Friedrich Karl was given command of the Second Army. His forces, including the Prussian Guard, made up the right wing of the German forces and advanced from the Rhine toward Saarbruecken. However, an unauthorized move by another general brought about an unexpected battle at Spicheren which found Prince Friedrich Karl cut off from his advance units. However, the Prince kept his head and despite heavier losses from the French, still won the battle. He played a key role with a bold move at the battle of Mars-La-Tour where the Prussians again suffered higher casualties than the French but still won the day. There were similar heavy losses at the battle of Gravelotte but Prince Friedrich Karl again played a crucial part in saving a faltering section of the army and gaining a Prussian victory.

The Prince participated in the pivotal siege of Metz, another Prussian victory, and while the combined German forces advanced on Paris, Prince Friedrich Karl was sent to the Loire valley to secure Orleans and prevent other French forces from coming to the aid of Paris. He carried out these duties with his usual determination, winning more battles at Orleans and Le Mans. Because of his meritorious service, King Wilhelm I, after 1871 Kaiser Wilhelm I of course, promoted the Prince to Field Marshal and awarded him the (extremely rare) Grand Iron Cross. With the war over and the German Empire created, Prince Friedrich Karl was tasked to put his military expertise to work as Inspector-General of the army, which also enabled him to spend more time with his wife (daughter of the Duke of Anhalt) and five children. Other countries also recognized his accomplishments; Tsar Alexander II gave him the rank of Field Marshal in the Imperial Russian Army and in 1878 Queen Victoria of Great Britain made him an honorary Knight Grand Cross of the Order of the Bath. He traveled around the world for a time, however, the life of Prince Friedrich Karl was cut somewhat short when he died, at the age of 57, in Potsdam on June 15, 1885 one of the most honored military figures of the campaigns for German unification.
Posted by Jovan-Marya Weismiller, T.O.Carm. at 00:30