Yet Another Washington Post Article on the DC Latin Massacre

'If you are a liberal archbishop ..., the last thing you probably want to see is the liberal newspaper in your city run three pieces ... show[ing] clear sympathy toward practicing Catholics being evicted from their parishes.'

If you are a liberal archbishop of a prominent archdiocese, the last thing you probably want to see is the liberal newspaper in your city run three pieces in the last few weeks on your DC Latin Massacre. Especially when all of the media coverage shows clear sympathy toward practicing Catholics being evicted from their parishes. 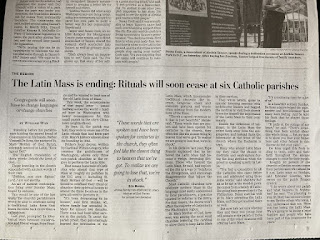 Today's Washington Post has an article by a reporter, William Wan, who visited Saint Mary Mother of God parish in DC yesterday morning. Planning his article on Friday and doing the necessary research on the issue that afternoon, his trip to Saint Mary's -- to actually talk with TLM parishioners -- was something DC Cardinal Wilton Gregory refused to do himself. Wan spoke with about a dozen communicants before and after the 9 a.m. traditional Latin Mass. His article shows the sincere reactions of several parishioners to Cardinal Gregory's decree suppressing TLMs at parishes effective in less than two months.

The article published today in the Washington Post follows pieces in the same publication here and here.

Standing before his parishioners holding the sacred bread of Communion in his hands, Father Vincent De Rosa, the pastor of St. Mary Mother of God Parish, solemnly intoned in Latin, “Ecce Agnus Dei.”

The English translation of those words: Behold the lamb of God.

Those kneeling in the church responded with ancient words of their own, “Domine, non sum dignus.” Lord, I am not worthy.

An air of earnest contemplation hung over Sunday Mass, tinged by sadness.

This would be one of the last weeks the church’s parishioners would be able to celebrate using a traditional Latin form that traces its roots back more than a millennium.

Last year, prompted by ideological wars between conservative and liberal wings, Pope Francis said he wanted to limit use of the old Latin form of Mass.

This week, the consequences of that papal letter — issued halfway across the world — landed here in Washington with heavy consequences for this small parish in the city’s Chinatown neighborhood.

By Sept. 21, the parish was told, they were to cease use of the Latin rituals that had been part of St. Mary’s history almost since its founding in 1845. Friday’s local decree, written by Cardinal Wilton Gregory, who oversees the archdiocese of Washington, allows only three non-parish churches in the region to perform the Latin Rite. That means hundreds of Catholics who attend that type of Mass at roughly six parishes in the D.C. area — including St. Mary Mother of God — will be forced to overhaul their ritual or abandon their spiritual homes to attend the three locations in the area allowed to perform it.

“It’s been devastating to be honest,” said Erin Menke, 42, whose family has attended St. Mary for almost two decades. Three sons had been altar servers at the parish. To assist the parish priest, they painstakingly learned the intricacies of the Latin Mass, which incorporates traditional elements like incense, Gregorian chant and elaborate gestures and words often missing from the modern form of the Mass.

“There’s a sacred reverence to it that is just beautiful,” Menke said. “These words that are spoken and have been spoken for centuries in the church, they often feel like the closest thing to heaven that we’ve got. To realize we are going to lose that, we’re in shock.”

In his decision last year, Pope Francis explained that he believed the Latin Mass had become a wedge, deepening divisions. Those who favored the Latin Mass, he said, had exploited the rite as a way to “reinforce the divergences, and encourage disagreements that injure the Church.”

Most Catholic churches now celebrate modern Mass in the language most easily understood by local parishioners, a practice spurred by reforms in the 1960s. For that reason, the decree won’t affect the majority of Catholics in the Washington region.

St. Mary Mother of God, however, was among the most vocal churches lobbying the cardinal to allow them to keep Latin Mass in their services. They wrote letters, spoke in synodal listening sessions with archdiocese leaders and begged the cardinal to visit their church to see for himself the importance of the Latin Mass to their community.

Beside the difference of language, in the Latin Mass the priest faces away from the congregation and instead faces the tabernacle at the front of the church where the Eucharist is kept. Many who attend Latin Mass say they value the chance to meditate and contemplate during the long stretches when the priest is speaking quietly in Latin.

“You feel a connection to all the Catholics who came before you and celebrated using those same words,” said Matthew Balan as he sat in the wooden pews. He comes from a family of Catholics going back generations in the Philippines. Balan met his wife at St. Mary attending the Latin Mass, and they got married there as well. But now he’s not sure whether they and their two young boys will remain at the parish or move to one of the other locations still offering Latin Mass. “It’s a confusing time for a lot of us.”

In a heartfelt sermon Sunday, De Rosa acknowledged the pain, anxiety and bewilderment that many were feeling. And he told his flock that he shared those feelings.

“It pulls at the strings of my heart,” he said. “There’s something that feels unkind about this whole thing. … But my goal is to show you that your father here and other fathers in this diocese do feel your pain.”

De Rosa urged this flock to cling to truth, unity and their faith throughout the seismic changes to come for their parish.

Roughly 60 percent of the church’s collection money comes from parishioners who attend its 9 a.m. Latin mass on Sundays, said Sylvester Giustino, who serves on the parish finance council.

“I do worry about our parish and what happens in September,” he said. “I’m planning to stay. St. Mary has become a home to me. But for others who leave, I can understand that too. We’re not just losing the Latin Mass. We are going to be losing a lot of families and people who have been part of this community for years."