Guest Article: The Octave and the Twelve Days of Christmas

Just to reinforce the fact that Christmas ain't over yet!

From the New Liturgical Movement

NLM is pleased to publish this reflection by Canon Aaron B. Huberfeld, Rector of St. Mary’s Oratory in Wausau, Wisconsin. 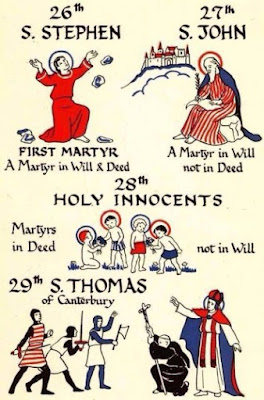 When people pursuing the devout life first undertake to deepen their life in the liturgical year, they are often astonished by the feasts they encounter during what is known as the Octave of Christmas (“octave” means “series of eight”, which can also be confusing, since of course we speak of Twelve Days of Christmas — more on that later). No sooner do we conclude the office of Christmas Day than we celebrate the feast of the first Martyr. Why is this so? Does the feast of St Stephen just happen to fall on December 26? Why would the Church turn so quickly from the creche to consider the deacon who was stoned to death after Our Lord's Resurrection? And what about the feasts of the following days? What is their connection with Christmas?

The first three feasts of the Christmas Octave have been observed since antiquity. They were always devoutly referred to as the Three Companions. We begin with St Stephen, murdered at the direction of Saul of Tarsus, whose conversion we shall celebrate one month later. Stephen was a martyr loquendo et moriendo, by his words and by his death. The next day we return to white vestments, for St John is the only Apostle not celebrated in red. He was the only Apostle who did not abandon his Savior at Calvary, and so God decreed that he should be a martyr loquendo sed non moriendo, by his words but not by his death, for he would be miraculously preserved from his execution and end his life in peace on the island of Patmos. Then on December 28 we celebrate Childermas, the feast of the Holy Innocents, those little ones of Bethlehem who, as we pray in the collect of their Mass, bore witness to Christ non loquendo, sed moriendo, not by their words, but by their deaths, for they were killed by raging Herod on the chance that one of them might be the newborn King.

Herods are to be found in every age, for sinful rulers always view the kingdom of Christ as a threat to their earthly power. And so on December 29 we keep the feast of Thomas Becket, the holy bishop of Canterbury who upheld the freedom of the Church from the interference of the state and so was cut down by King Henry II’s men during Christmas Vespers.

On December 30 we take up again the Mass and Office of Christmas, like a beautiful refrain, and then remain in white vestments for the conclusion of the Octave. December 31 is the feast of St Sylvester, celebrated in white because he is the first pope who was not a martyr, bringing the age of martyrs to a close with the peace of Constantine. On this Seventh Day of Christmas, the Church has emerged from the catacombs, and she brings with her the fullness of her sacramental life. She is mindful of the words of her greatest prophet which have been so wondrously fulfilled:

These seven gifts of the Spirit of God which rest upon the Anointed One are given in turn to all those who are associated with His Passion by their reception of the Seven Sacraments:


And it shall come to pass in that day, that the Lord shall set his hand the second time to possess the remnant of his people...And he shall set up a standard unto the nations, and shall assemble the fugitives of Israel, and shall gather together the dispersed of Juda from the four quarters of the earth...And the Lord shall lay waste the tongue of the sea of Egypt, and shall lift up his hand over the river in the strength of his spirit: and he shall strike it in the seven streams, so that men may pass through it in their shoes. (Isa. 11, 11-12, 15)

The day after, on January 1st, this Son of David will submit to the Old Law by His circumcision—but only to bring the Old Covenant to fulfillment. Twelve days later, on the Octave of the Epiphany, we shall see Him fulfill all righteousness with His baptism in the Jordan. Righteousness comes from the wood of the Cross, at which we draw waters in joy from the seven sacramental founts of our Savior’s pierced Heart. (Isa. 12)

Why, then, do we not conclude Christmas with its Octave day? Why count “Twelve Days of Christmas”? To find the answer, we must draw from the treasures of the Church’s full liturgical tradition during this season. If we look to the liturgy before the reforms of the mid-twentieth century, we find that the Three Companions have not left the Christ Child. Each in turn takes his bow as we celebrate the Octave days of St Stephen, St John, and Childermas on January 2nd, 3rd and 4th respectively. And note the prayer for St Stephen’s Octave, which differs only in its opening words from that of December 26:


Almighty and eternal God, who hast dedicated the first fruits of the martyrs in the blood of Blessed Stephen the Levite...

And that of Twelfth Night, Eve of the Epiphany:


Almighty and eternal God, direct our actions according to thy good pleasure, that in the Name of thy Son we may abound in good works.

If the first seven days of Christmas bring us the Seven Gifts of the Holy Ghost, it is the Twelve Days as a whole that allow us to yield His Twelve Fruits in our moral and spiritual lives. (Gal. 5, 22-23, Apoc. 22, 2)
Posted by Jovan-Marya Weismiller, T.O.Carm. at 15:09