Consecrated Virgins: 'I Got Married to Christ' 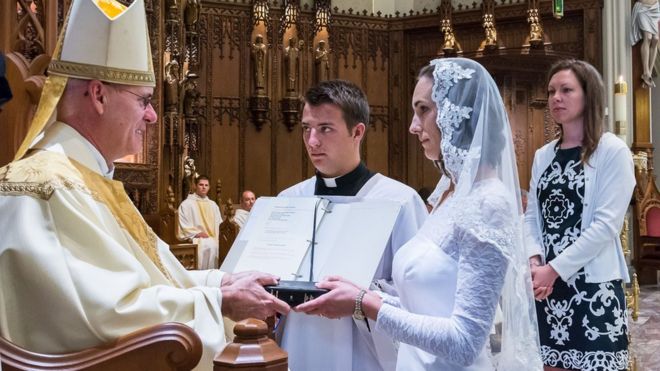 Jessica Hayes bought herself a wedding gown, a veil and a ring. But when she stood at the altar facing the bishop during a solemn religious ceremony, there was no groom by her side.
She was getting married to Jesus Christ.
Ms Hayes, 41, is a consecrated virgin - a vocation taken by women within the Catholic Church who wish to give themselves as brides to God.
Even within Catholicism, consecrated virgins are little-known - partly because the vocation was only publicly sanctioned by the Church less than 50 years ago.
During the consecration ceremony, the candidate - who wears a bride-like, white dress- makes life-long chastity vows and promises never to engage in sexual or romantic relationships.
The women also wear a wedding ring - a symbol of their betrothal to Christ.
"I often get asked: 'So, are you married?'" says Ms Hayes, who is one of this year's BBC 100 Women. "I usually just reply with a really brief explanation that I am similar to a religious sister, that there's a total commitment to Christ, but that I live out in the world."

She is one of 254 "brides of Christ" in the US, according to the United States Association of Consecrated Virgins (USACV) - whose day jobs range from nurses and psychologists to accountants, business women and fire fighters.
There are at least 4,000 consecrated virgins in the world, according to a 2015 survey, and the Vatican says there has been an upsurge of vocations "in very diverse geographic areas and cultural contexts".
Unlike nuns, consecrated virgins do not live in enclosed communities or wear special clothes; they lead a secular life, have jobs and support themselves.
There is no such male equivalent in the Catholic Church.

A little-known vocation in Catholicism

4,000
consecrated virgins in 78 countries, according to a 2015 survey
Source: Congregation for Institutes of Consecrated Life and Societies of Apostolic Life (CICLSAL) and USACV
"I have been a teacher for 18 years, I'm actually teaching at the same high school that I went to," says Ms Hayes, who lives in Fort Wayne, Indiana, US.
"[Before my consecration] I realised I didn't share a call to [the] community life nuns live, in a religious congregation or with a specific apostolate [a form of evangelistic activity or work] that each of these communities would have."

When she is not teaching, most of her time is devoted to private prayer and penance. She reports to a bishop and keeps regular meetings with her spiritual adviser.
"I live in a neighbourhood, I belong to the parish that's just two miles away from my home, I am available to help family and friends. And then I teach, so I am surrounded by people during the day, but still accommodate a special consecration to the Lord around that."
She has been in romantic relationships in the past but says they never made her feel complete.
"I thought I was called to married life, [which] is a very natural desire for the human person. So I did date… but never seriously."
"I dated all good people, but with no-one I felt that pursuing it further was the best thing to do at the time."
'Permanent commitment'
Virgins have been part of the Church since early Christian times. In the first three centuries AD, many died as martyrs as a result.

Among them was Agnes of Rome, who was reportedly refused to marry the city's governor and was killed as a result of her devotion to religious chastity.
The practice then declined in medieval times as the popularity of monastic religious life grew, only to be revived by the 1971 Ordo consecrationis virginum, the document through which the Vatican recognised female perpetual virginity as a voluntary state of life within the Church.
Ms Hayes says she had not thought of becoming a consecrated virgin until she met a spiritual adviser who, she says, "started asking the right questions".

She made the decision in 2013, and her consecration took place two years later at the age of 36.
"Even though I have a lot of the same duties that I had before [the consecration], it's still different because to relate to the Lord as spouse is entirely different to relating to him as friend."
The choice of celibacy is a means of drawing even more closely to the following of the Lord. What I do is a gift of my body to Him"
Jessica Hayes, American consecrated virgin
Living in a society where sexuality is held in high regard can be challenging for virgins, who choose to eschew physical relationships forever.
"I think the hardest thing is being misunderstood, as our choice is seen as counter-cultural," says Ms Hayes.
"I get a lot of, 'Oh, so you're like a single person.' I have to explain that the Lord is my primary relationship, that what I do is a giving of my body to Him."

Last July, a new set of guidelines published by the Vatican caused a stir among consecrated virgins.

The issue at stake was whether women choosing this vocation needed to have remained a virgin up to the point of the ceremony.
Unlike nuns, who may take a vow of celibacy from the day they enter a religious order, these brides of Christ have been expected to be life-long virgins.
In the controversial section 88 of the document, the Vatican now states that "to have kept her body in perfect continence or to have practised the virtue of chastity in an exemplary way" is extremely important, but not an "essential" prerequisite.
In other words, it may no longer be necessary to be a virgin.

The USACV, of which Ms Hayes is a member, found the guidelines "disappointing".
In a statement, the association said it was "shocking to hear from Mother Church that physical virginity may no longer be considered an essential prerequisite for consecration to a life of virginity."
Ms Hayes says she wishes there was "some more clarity" in the document, yet is happy that the head of the Catholic Church has focused attention on the virgins' vocation.
"And the document still says that [candidates] must not have been either married, or in public or flagrant violation of chastity," she says.

"Maybe there's one indiscriminate act in the past as a young person, or maybe a woman who was raped and so is not a virgin, but not out of choice."
Ultimately, she says, it is about encouraging this particular vocation among Catholic women.
"And maybe vocations are growing because there's a need for people living in such a radical commitment to God - that may be what the Church needs right now."